A glitch in how the state pays for roads may in fact end up costing the state more money in the long run. When it comes to cost saving maintenance of local streets, the state ends up paying more money to completely rebuild streets rather than extend the life of the street through maintenance. 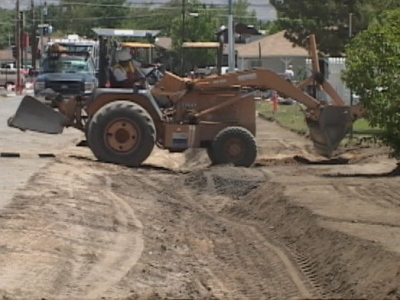 Bishop Public Works Director David Grah explained that the city would have to spend $1.3 million a year over the next 20 years in order to bring all the city streets into the fair category. The city currently spends about $1 million a year on street projects, but the money is not generated by local tax revenue. Instead, a portion of state gas tax is set aside for local road projects.

According to Grah, pavement is cheaper to maintain than to replace but the State only pays for reconstruction not maintenance. The catch is that the State money cannot be used for maintenance like chip seals, or slurry seals. Grah says that these types of treatments can be cost effective. While the city has money to pay staff to fix potholes when needed, the city cant afford this type of preventive maintenance.

Grah says that the State used to fund construction and maintenance, but in recent years the State money has been taken away to fund highways and transit projects. If there is any money left over, some may be used for local roads. When there is money for local streets, the street has to be rebuilt not fixed. Even this money is uncertain. Hanby Street is scheduled for rehabilitation with federal stimulus money, but other state funded projects in town are on hold.

Proposition 1B money was used in part to fix up Grove Street, but Grah explained that this money was a one time deal that the city is eating through. When this money is gone there will be, no funding for maintenance in the City of Bishop.

With millions of dollars tied up in the local streets, Grah says that the streets may be the biggest public asset in the City, but this catch in how streets are funded may lead to the wrong incentive for other cities and counties in California. When asked if the City allows streets to get really bad and then apply for state construction grants to rebuild the street, Grah said right now in the funding climate that we have, thats basically what we do.