By News Staff on May 22, 2017 in Government Agencies/Utilities

As Northern Inyo Healthcare District plans for the July 1 start of a new fiscal year, District leadership updated the Board of Directors Wednesday night on the economic challenges facing the healthcare organization, and on some pleasantly surprising statistics regarding the cost of care in the region compared to the state average. 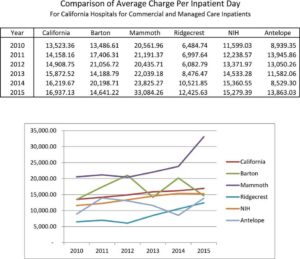 “Northern Inyo Hospital does not have the highest rates,” Tremble said, displaying the results of his findings in a chart. “We are consistently below the state average and well-positioned in the middle of the regional costs. Your efforts to keep down costs to patients have paid off.”

A look at the five-year trend showed some variances, with the hospitals jockeying between positions depending on the year. However, Northern Inyo Hospital and Ridgecrest have maintained the most consistent positions, offering a steadily lower average daily inpatient charge since 2010.

Tremble then turned his attention to the coming year. While district staff hoped to present the proposed 2017-18 operating budget to board members in April, continued efforts to find cost reductions, and to counter-balance a less than perfect reimbursement system resulted in a delay.

Tremble placed a fair share of balancing woes on the shoulders of Congress and its 2013 Sequestration plan. Presented as a temporary fix to federal budget woes, it continues to haunt healthcare systems five years later.

“Sequestration was a two percent reduction in all net Medicare revenues in every patient care setting,” Tremble said. “Five years later Congress is still doing temporary resolutions for budgets. As a result, NIHD has been averaging a $450,000 annual loss on Medicare, guaranteed each year. It’s now approaching a loss of $1.95 million for the five years by the end of this fiscal year, and this continues to be one of the challenges for us in bringing you a positive budget.”

Tremble said sequestration impacts everything from outpatient fee schedules to vaccines, to professional fees, Rural Health Clinic services, to swing beds. He said there is at least one bill before Congress that would eliminate sequestration for critical access hospitals, rural health clinics, and community health centers with the 2018 federal budget. Passage, he noted, remains to be seen.

Other budget-balancing challenges remain the increased cost of services, a decrease of inpatient revenue as the District keeps pace with the national shift to increased outpatient care, and the need to replace aging equipment.

While it seems apparent that NIHD will have to increase rates, the question remains how much. In an interview Thursday, Chief Executive Officer Kevin S. Flanigan, MD MBA, said the staff is working hard to reduce costs while preserving its focus on improved health outcomes.

Dr. Flanigan noted this past fiscal year and next are transition years which are always a fiscal challenge. “The District is working hard to achieve the fiscal shortage laid out last year with a greater emphasis on outpatient services and less dependence on inpatient care.”