Tuesday’s special meeting of the Northern Inyo Hospital board meeting started calmly enough, with a brief statement from the nurse’s union organizing committee spokesman and supportive comments from members of the medical staff. 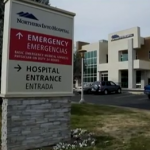 When the board came out of closed session, Board President M.C. Hubbard explained the meeting had been called so the board could learn what their role was in the newly-formed union. “The cards will be validated and nothing can be done until then. It will take about a month” before any negotiations can begin.

The process involves the cards signed by RNs, nurse practitioners and physician assistants vetted to confirm a majority support the union, part of the American Federation of State, County and Municipal Employees.

The fireworks didn’t start until the board opened the floor for final comments. In response to questions from Dr. Jennifer Scott, administrators went on the defensive. Chief Executive Officer Victoria Alexander-Lane and Chief Nursing Officer Kathy Decker both explained the steps they had taken to deal with financial issues and the caregivers’ concerns, respectively.

Blame for the communication disconnect between caregivers on the floor and administration appeared to be put on middle-management. In response, Maura Richman, a member of the organizing committee, said “we love our middle management. They’re just stressed.”

One of the issues referred to during the hour-long comment period was balancing nurse to patient ratios in the fluid dynamics of hospital care. Scott, an emergency room physician, explained the impact of pulling a nurse off ER duty to fill in elsewhere; a floor nurse described the stress of patient care when her shift was short a nurse’s assistant. “This is our reality,” she said.

“The best nurses in our hospital are on the organizing committee,” said Scott. “We have to come together. There’s no ‘you,’ no ‘they’ or ‘middle management.’ I don’t believe this is about money, it’s about having a voice in patient care.”

Scott’s suggestion that the hospital “would be better served by a 360-degree review,” was not taken well by Decker or Lane. “We need feedback from the bottom to the top,” she said, “as well as from the top down.”

“We need to step back, take a breath and respect each other,” said Hubbard, ending the meeting.

Being called off when there is more staff then needed? Sounds completely reasonable to me. Why should the hospital have to pay employees if they aren’t needed? Must be a union mentality you have there…I’m not sure what kind of business sense you have, but that kind of practice isn’t… Read more »

It might not sound completely reasonable if it were you or your family member that has their nurse sent home and another nurse who is caring for other patients is abruptly asked to take over care. Plus, just like selling widgets on Main Street, hospitals can have unpredictable surges in… Read more »

One of the main issues that the nurses are not happy with is when they are called off if there is more staff than needed. They are sent home. They do not like this and they want that practice to stop.

Sounds like the disgruntled employees need to move out or on to another job. There are plenty of other folks that would be grateful to have your job.

Reality is most people talking smack about others haven’t got off the couch to educate themselves or fill an application.

@Reality,
If what you say is true, why is the hospital in a constant state of recruitment?

Hubbard needs to step up, not back, If the hospital has money problems it’s the fault of the board not past administrations, As to the nurses, tyranny happens when good men (and women !) stand by and do nothing. These are the kind of people I want at my bedside… Read more »

This is a very delicate issue for employees at the hospital who do not feel safe. These employees understand the need for cost cutting measures and are willing to help, but not at the cost of patient or employee safety. These employees have been bullied by the previous administration as… Read more »

As a local Hospital District resident, I’m glad to see the cost cutting measures in place. I can see how the staff would feel that management is out of touch, but honestly, the prices here are so high that I go to carson city for special services. If management can… Read more »

I’ve been hearing a lot of “off the record” conversation from rank and file staff at the hospital about how the Board of Directors of NIH is completely out of touch with Staff and that it really began with the new Director they hired, there’s been a lot of unusual… Read more »

“We need to step back, take a breath and respect everyone,” would have been an appropriate reaction six months ago. Now it’s simply dismissive and trite.