Wednesday evening’s meeting of the Northern Inyo Hospital board was, literally, standing room only. 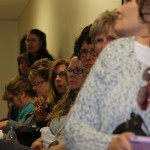 The board opted to strictly adhere to the 50-person limit on the meeting room on Birch Street; the other approximately 50-55 people in attendance lined a long hallway through a 90-minute report from the district’s auditor, waiting for the public comment period. As people wound their way into the room to comment on issues raised by healthcare staff forming a union, someone in one of the 50 meeting room seats had to leave.

While this regular board meeting was less tense than the special meeting called Feb. 10, more community members stepped up questioning both the board and the administration. 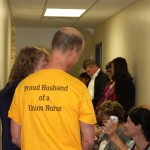 Becky Taylor spoke first, accusing board members of abdicating to the chief administrative officer, Victoria Alexander-Lane. Taylor wants to see a community forum put together to address the issues of what she called “a toxic environment.” Those issues included unhappy employees, the number of terminations and those reversed by the board, the Human Resources Department as an employee advocate and the nurses’ concerns prior to forming a union.

Eric Richman, a Bishop school district board member and husband of an NIH nurse, challenged Board Chair M.C. Hubbard’s assertion that the Brown Act requires that once a meeting place is posted that location is set in stone. “You just have to leave somebody to point (to the changed board venue,” Richman said. “Why do you need security?” he asked. “Why did we have to stand through a 1-1/2 hour audit report. The board is in charge. The employees do not feel valued. This shouldn’t be a you against them situation,” he added. Security staff said they were there primarily for crowd control. 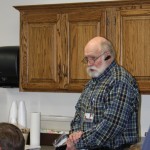 Dr. William Dillon spoke to the rumors circulating among the staff and the community, specifically that staff could not approach board members or speak on hospital issues. “I don’t know if it’s true,” he said, “but it doesn’t seem right. It’s (the rumors) like fire, it just consumes everything. The board has to be open, honest and direct and stay involved with terminations. We have to work together.”

Two of the speakers, hospital staff, asked that the board hold off on approving the hospital’s new grievance policy that removed the board from the process.

Chief of Staff, Dr. Thomas Boo began his report by saying “I can’t sit here like it’s business as usual. You know the medical staff is having a meeting regarding the hospital leadership.”

Hubbard had responded to earlier questions of staff speaking to board members. “I need to clear up that perception,” she said. “It’s not true.” To Boo, Hubbard said “this is not on the agenda. We can’t discuss anything but policies and appointments” two items on Boo’s staff report.

The new business and action item on the hospital’s complaint and grievance policy was tabled for lack of a second to Dr. John Ungersma’s motion. Both Ungersma and Hubbard explained that eliminating the board of directors as the last appeal for complaints or terminations was standard procedure at other hospitals. Board member Pete Watercott explained that it is difficult for the board to judge what really happened when an employee is terminated. “The few times we have overturned a dismissal,” he said, “it makes it very hard on management.”

Alexander-Lane explained that she simply followed policy in the employee disciplinary process. “We do value our staff,” she said. “This is being perpetuated by people with a hidden agenda. They’re fear mongering.”

As for the nurse’s progress toward a union, committee spokesman Christine Haney said the hospital had requested the American Federation of State, County and Municipal Employees validate only the RN union on the grounds that nurse practitioners and physician assistants, the other categories included in the organizing effort, have less in common with RNs.

To expedite the union effort, Haney said, the RNs will proceed with their union, then begin the process of forming a union for nurse practioners and physician assistants.

In fact, there are indeed “clerks” at NIH that do make in excess of $23/hour. I worked there very long ago and was hired on with zero experience as a teenager at $12/hour. Spent 10 years there under Mr. Spencer and it was nice. Now it is every department for… Read more »

Past Clerk
Reply to  Ickity

Exactly, after TEN years you made it to $21, don’t you think after ten years you deserved that money (or more) and earned it?! It’s not like they are paying just anyone $20 to be a clerk. And yes you may not have had any credentials but ten years of… Read more »

Ickity I will tell you as a CURRENT CLERK I do not make $21 an hour! I wish! I have been here 4 years and am no where close to that! I too was hired on with zero experience, but you might want to check your resources before making assumptions.

Have you ever heard of cardiac enzymes Cindy? There are many other tests that physicians use in an emergent setting to determine if the patient is having a heart attack. A treadmill is a non-emergent diagnostic test when all else fails to prove the patient is having cardiac issues. Nurses,… Read more »

Reality Check: I think an elephant weighs more than 800 pounds. Your pension comment is questionable and if it was so gold plated, why would nurses leave NIH? Though they do make more money in Mammoth. Nurses are notoriously kind at NIH-one disgruntled employee does not reflect the “reality”..

The reason nurses leave NIH are the working conditions and ow they are treated by admin and fellow employees.. Believe it or not, most nurses are not in it for the money. They do it because they can make a living helping people. Helping people is in their DNA.

The nurses now do the EKG’s after hours, no one is sent home. Reality check is correct as well. I am not sure why a clerk needs to make $23/hour to push papers around while having no credentials what-so-ever. There are many things wrong at NIH, as well as many… Read more »

Past Clerk
Reply to  Ickity

I can tell you from experience, the NIH clerks do not make anything even close to $23 per hour.

Also, clerks do MUCH more than just “push papers around”.

The 800 pound elephant in the room that no one is talking about is the gold standard benefit plan the NIH employees have. They have a defined beneft pension plan that no other hospital around has and their gold plated plan is over to 60% of the hospital budget I… Read more »

John D. I agree with. I have good reasons not to be a big fan of NIH that I clearly express my unkind views on before hand . But since I recently had a out patient surgery at NIH I realized more than ever that it’s not the nurse’s or… Read more »

Trouble: I understand your concerns about the lack of specialists. Same here at Mammoth. Mammoth Hospital does great at broken bones and other orthopedic problems but things like ENT problems they just don’t have the staff. But that is understandable. Mammoth (and Bishop) are small towns with not enough patients… Read more »

I agree Ken, but NIH needs to get people who may really need help to the proper help asap. I know of three people who damn near died because they were sent home, then nearly died. I’m one of those three.

RC: Yes, I know. I also have first hand experience. He’s ok for somethings but not for everything. I go to Reno when I have a problem that needs to be addressed when the visiting ENT is not in town.

Justin-you nailed it! The NIH staff has been treated very well ever since I was born there. Yet-the pay is through the roof! Examine the long standing policy of the ekg department receiving call back of over $27 EACH time they are called in, plus a minimum of one hour… Read more »

Ickity, I’m not sure what part of the world you come from, but as a small business owner, if I call an employee in, I am required to pay for a 4 hour minimum in wages. You claim $27 plus an hour and a half pay is excessive when someone… Read more »

Finally someone is beginning to uncover the real issues. Current administration is looking at the whole picture. The good ole’ boys club is finally being exposed . How many organizations do you know in which one can directly work for their spouse? Have their yearly evaluations written by their spouse?… Read more »

So sorry Cindy…. A treadmill stress test was never available after hours. Don’t mislead the public. Do you really think you are the only one qualified to do an EKG? Find another facility that pays on call wages for an EKG. Most facilities have RT or the ED tech do… Read more »

available except during business hours. As far as being on call I would not go back to

it, pt are kept in the hospital over the weekend to await a treadmill.

Are you calling the RNs monkeys? I think you just proved many people’s points. – that the NIH administration treats people and talks about people as if they are trash, or monkeys.

Evan a monkey can do it ? Well this kind of shows you how hospital employees are treated ? The mess at NIH has nothing to do with money.

Justin- Unless you work at NIH, you are shooting from the hip with your unsubstantiated claims. I am qualified to state that most care staff at NIH agree that changes are are/were necessary to adapt to the changing health care system. The methods by which these changes are being made… Read more »

The meeting last night makes it clear to me that the “unionizing” activity at the hospital is nothing more than a smoke screen for a much bigger issue. There is a full-blown insurrection against the hospital senior leadership by a portion of the hospital employees who are in collusion with… Read more »

I do not understand why the NIH Administration and Board have a problem allowing the RN’s to have a strong input regarding patient care and operation at NIH. The RN’s are the trained professionals who care for patients on a continual basis, they are the ones who have the 24/7… Read more »