They drive past every day — trucks pulling 53-foot hay trailers headed up and down U.S. 395. The next one that passes by, take a long, hard look at the trailer and picture it loaded with recyclables like paper, plastics and bottles. That trailer is equal to the amount of recycling diverted from the local landfill in just three months thanks to Northern Inyo Hospital’s Green Committee. 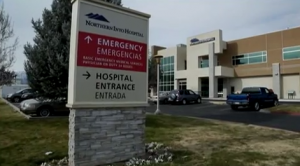 Established last year by hospital administrator Victoria Alexander-Lane and a group of ecologically-minded employees eager to cut waste, The NIH Green Committee partnered with The Sierra Conservation Project and Preferred Disposal to do as much recycling as possible. None of the committee members knew what that would mean in the long run; they just knew it was the right thing to do.

An exact answer came at the end of June, and the results were huge.

That’s right 23.2 tons. It is projected that within a year, NIH will have recycled 92.808 tons of materials.

Environmental Services Manager Richard Miears presented this information to the NIH Board of Directors during its July meeting. Miears, who has a background in trucking, was the person who realized the visual of a hay truck. He estimated that 650 bales of hay at 65 lbs each equaled 42,250 lbs — 4,000 lbs less than what NIH recycled.

“It’s a good start,” Miears said, “but we want to take this from good to great. We have plans in place to explore other areas where we can reduce waste.”
For example, the NIH Green Committee began recycling coffee grounds to the Bishop High School Future Farmers of America’s composting program.

The committee is working with NIH’s Maintenance Department to explore the use of LED lighting within the hospital. Miears said if the hospital switched over completely, NIH could save up to $200,000 per year in electrical costs. Not bad, considering the hospital’s current power bill is an estimated $480,000 a year.

“The success of this program rests in small efforts as well as the larger projects,” Miears said. “Every little bit helps. Every project counts.”

So when the NIH Information Technology agreed to be the first department to use recycled paper, the Green Committee was delighted. An even bigger effort is the recycling of blood pressure cuffs and pulse oximeter probes.

“If the deal works out with the medically-certified recycling company we are working with, it could save the hospital $15,000 a year, and one year will pay for two-and-a-half years of our local recycling program. If that isn’t a win-win situation, then I don’t know what is,” Miears said.

Miears would especially like to thank the hospital’s Environmental Services and Dietary staffs and all the hospital employees who have participated in the recycling effort. “It’s really a team effort,” he said.