For more than 56 years, the Northern Inyo Hospital Auxiliary members have invested their time, talent, and treasure in the health and well-being of the residents of the Northern Inyo Healthcare District. As the Auxiliary recently gathered to install its slate of officers for the 2019-2020 year, President Judy Fratella was pleased to share just how committed the small but mighty group is to the communities NIHD serves. 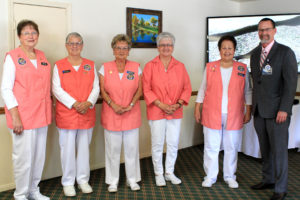 In the last year, the Auxiliary raised almost $14,000 for NIHD healthcare services. The group raises funds through its popular Holiday Craft Boutiques, community donations, and the operation of the hospital’s Gift Shop. These sales of handmade quilts, baby clothing, flower bouquets, and See’s Candy often make the difference between a good and great fiscal year for the group.
Leading the organization for the next year will be President Judy Fratella, Vice President Vivian Mitchel, Treasurer Sharon Moore, recording secretary Judy Speed Castleberry and corresponding secretary Carole Sample.
In the past year, the Auxiliary members gave 11,990 hours of their time to NIHD. That’s 3,937 hours more than the previous year. In all, the additional 11,990 brings the group’s official recorded hours since 1982 to a grand total of 215,406 hours.
President Fratella awarded service pins to those members who reached a milestone in their hours of service. Those members included:
Sharon Moore with a Lifetime Hours of Service total of 16,366;
Nona Jones with 11,500 hours;
Judy Fratella with 7,500 hours;
Vivian Mitchell and Shirley Stone, each with 3,500 hours;
Diane Remick with 3,000 hours;
Betty Dickey and Cheryl Underhill, each with 2,500 hours;
Jacque Johnston with 1,500 hours;
Betty Buckle and June Shaw, each with 1,000 hours; and,
Newer members Darla Cummings, Pat Flanagan, and Vicky Spear, each with their first 100 hours.
The purpose of the NIH Auxiliary is to render service to the hospital and its patients through ways approved or proposed by the Northern Inyo Healthcare District Board of Directors. Founded in the early 1960s, the Auxiliary has raised and donated more than $600,000 toward equipment purchases for the hospital.

This year the group purchased a $12,000 bladder scanner for the Perioperative Department. The Auxiliary also put $25,000 toward the STERIS Clarity System, a digital imaging system that enhances the clarity of photos and videos captured during surgery, allowing for improved post-operation reviews and follow-ups. In recent years, the Auxiliary has helped provide the Automated Breast Ultrasound machine for early breast cancer detection in women with dense breast tissue; and, a Mini Immunoassay Analyzer for the Laboratory which increased the ability to diagnose and treat bacterial infections.

The group also purchased an electrocautery machine for the surgical suites; and, five bedside bassinettes which keep newborns within the mother’s natural reach after delivery.

Membership in the Auxiliary is open to men and women. President Fratella reminds everyone that all help is welcome and appreciated and that there are no prerequisites for membership. General meetings of the Auxiliary are held the third Wednesday of each month at 10 a.m. at the Birch Street Annex, 2957 Birch St., Bishop.

Anyone interested in making a financial donation, or interested in joining the Auxiliary, may call Sharon Moore at (760) 872-4198.