The last look at an eclipsed full moon until 2010. The total lunar eclipse captured the attention of people up and down the Eastern Sierra, who could be seen walking outside their businesses or jobs to gaze skyward. Truckers pulled over to get a look at the night-sky show, too. 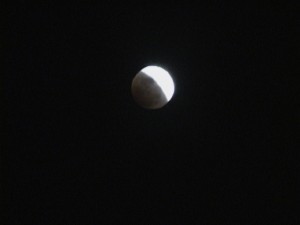 We were not alone in our looking. News reports said that the total eclipse was viewed from both North and South America. People in Europe and Africa could also see the shadowed moon high in the sky before dawn today (Thursday).

Saturn and the star Reguulus popped out on either side of the big moon. Jack Horkheimer, host of the PBS show Star Gazer, called the phenomenon the moon, the lord of the rings and heart of the lion eclipse.

The next total lunar eclipse is expected December 20, 2010. Some parts of the country missed the spectacle due to cloud-cover, but most of the Eastern Sierra gave way to clear night skies for viewing.

So, what is a total eclipse? The full moon passes into Earths shadow and is blocked from the suns rays that normally light it up. During an eclipse, the sun, Earth and moon line up, leaving a darkened moon visible to observers on the night side of the planet. At total eclipse, the moon appeared slightly orange in the Earths shadow.

We work to provide daily news to all of the Eastern Sierra, in the tradition of Eastern Sierra News Service and the Sierra Wave. We bring you daily happenings, local politics, crime, government dealings and fun stuff. Please contact us.
View all posts by News Staff →
Mammoth Hospital Issues Revealed
Marijuana Bust in Chalfant