This week, Caltrans tree trimming crews from Stockton came to the Eastern Sierra. Their job was to take care of tree hazards 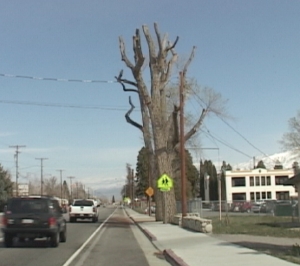 along highways. They started at Coso Rest area, moved on to Olancha and then Big Pine where they performed a severe trimming job on two elm trees. 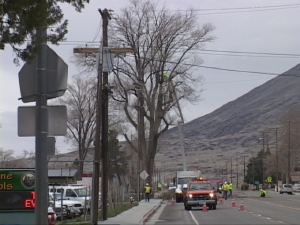 Spokesmen said that the trees presented a hazard with falling limbs near the school yard in stormy weather. The trimming job left little of the formerly tall elm trees.

Caltrans also showed up in Independence to trim branches off a very tall cedar. A man on scene said it was to get branches out of the way of traffic, including big rigs.

***
To those who have asked about the DWP groundwater pumps churning out water south of Big Pine, Inyo Water Director Bob Harrington said the pumps are in “on” status and in the pumping plan. Inyo County did not endorse the pumping plan but did not dispute it either. Harrington had said that Inyo expects DWP to come up with a pumping plan this spring that will use new ways to manage pumps and groundwater in the Big Pine/ Aberdeen area. DWP’s new pumping plan goes to Inyo in draft form April 20th with ten days for Inyo to comment.

***
An AT&T update from Supervisor Hap Hazard reveals that the mega cell phone company does have plans to install a temporary cell tower in the Chalfant area where customers still don’t have any service since the Alltel to AT&T change over.

***
In Sacramento, the Senate Health Committee has approved a bill that requires minors to wear helmets when skiing or snowboarding at California resorts.

We work to provide daily news to all of the Eastern Sierra, in the tradition of Eastern Sierra News Service and the Sierra Wave. We bring you daily happenings, local politics, crime, government dealings and fun stuff. Please contact us.
View all posts by News Staff →
Bureaucrat Beat: Glitz, Bullies and the FDA
Lupe Almaguer’s attorney will ask for sentencing continuance