By News Staff on April 8, 2014 in Government Agencies/Utilities 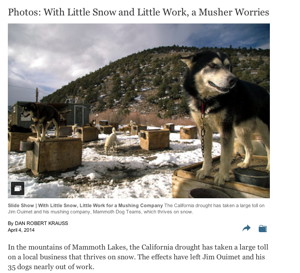 The drought hurt lots of businesses this winter but none so graphic as Mammoth Dog Teams where owner Jim Ouimet and his sled dogs took no runs at all this year of very little snow. The New York Times took an in-depth look with an article that ran April 4th.

Writer Dan Krauss visited Ouimet and said the effects of the drought have “left Jim Ouimet and his 35 dogs nearly out of work.” In fact the lasts sled-dog tour for Ouimet happened in March of last year. On top of no snow, according to the Times, Ouimet’s well at his kennel went dry. He has had to drive into Mammoth from his headquarters five miles outside of town to fill up big water containers for his dogs.

According to the Times article, Ouimet spends about $10,000 per year to feed the dogs. Loans from friends and relatives have helped. For Ouimet, the dogs are his life. As the New York Times article describes, Ouimet was born in Mammoth Lakes and came home in the 80s after more than four years in the Marines.

Ouimet learned the craft of mushing from Paul Marvelly of Dog Sled Adventures. Ouimet took over the business in 1999 and renamed his company Mammoth Dog Teams.

Instead of the five runs a day during a busy season, this winter has meant no work at all for the dog teams and Ouimet. In fact, the past three seasons have been rough for sled-dog runs. Like so many others, Ouimet prays for the heavy snow to return.

Positive Effects of Tethering by Nancy Russell* Those who show dogs or have them as house pets tend to think that only a kennel or fenced yard is a suitable way to confine a dog. The animal rights people claim that tethering a dog is cruel and promotes aggressive behavior.… Read more »

Proper Dog Tethering Has Many Benefits by LittlestMusher | Posted in Be The Lead Dog Oregon is currently considering some myopic and ill-conceived legislation that would ban tethering of dogs with some small exceptions. I happen to qualify for one of those exceptions currently written into the bill (i.e. dogs… Read more »

Northern Dogs like sled dogs have been sled dogs for a long time. In the summer, their warmth holding undercoat falls out and in the process often looks shaggy during the shedding process. Once those inner warmth giving hairs are shed, what is left behind are hollow insulating hairs that… Read more »

We don’t need slave dogs chained to boxes for their eternity anymore. We have snowmobiles, and snow cats, and skis and snow shoes now and our own two feet. Perhaps the struggles the dog sled operator is having is for a reason, the reason being right. People still trap and… Read more »

They’re well cared for. The only thing those kids need is snow! They are never happier than when they are up to their chests in the white stuff. Sadly we can’t do anything about that, but quit picking on the man and his dogs.

I’m a little less concerned with the tethering of these dogs, than their exposure to how very hot it can get at that location in the summer for those thick coated dogs. It appears there is only a small patch of shade for each of them in the shadow of… Read more »

I am bemused that a story about a local business suffering from the drought quickly devolved into Dog Lover’s long standing feud with Jim Ouiment and his dogs. Jim’s working dogs are very well taken care of, strongly loved, and housed in the centuries long proven method. The ignorant suggestion… Read more »

I’m embarrassed to be an eastern Sierran reading some of these comments. Instead of supporting a struggling businessman in our community he is harassed about tethering his dogs. Tethering in regards to a working sled dogs is standard practice. Period. If there was a better way mushers would be doing… Read more »

I don’t get the Sled Dog bashing. I don’t get bashing horses and mules either. These activities built the Eastern Sierra. They are tradition in Mono County and our history. The NYTimes article is about drought in California. https://www.nytsyn.com/images/photos?keyword=Mushing You have to honor the tradition that Mr Ouimet is holding… Read more »

“Honor the tradition”?
I’m sure they said the same thing in the South during the Civil War.
I think the time has come to unchain the dogs and let freedom ring! =

If you unchain them and let them run loose in the property there will be bloody fights and injuries that require expensive emergency treatment. Dogs tear off ears and chew legs to the bone in fights if you don’t get in there and break them up, which in practice means… Read more »

Well written response DT, you told the true Husky story far better than I did. The sad reality in dealing with PC extremists is they likely didn’t even read your post before disliking it! They throw out their complaints and demands and then scurry for cover when a reasonable sound… Read more »

You’re probably right. I always feel like a bad dad going to work and leaving my kids home alone with each other in that yard. This is how I think, if I stay in the home I own now I am giving serious thought to building a nice sturdy steel… Read more »

No doubt these dogs love to pull anybody who thinks different has no idea what they are talking about. Paul Marvelly saw drought years, he didn’t let that stop him. He decided to offer visitors golf cart rides on the golf carts he bought from Bishop Country Club. He had… Read more »

FYI – Jim Ouimet says he will gladly talk directly to anyone who would like to come out and speak with him about his operation and his dogs.
BK

I would like to hear from Animal Control on how the apply the California tethered leash law in California. I’m guessing it’s completely discretionary which is complete bs.

go back to sleep
Reply to  Benett Kessler

No thanks Benett, it’s much easier to sit behind my computer and spew negativity and complain…

I did talk to Jim once about two years ago. He loves his dogs.

I don’t like how Mono County picks and chooses which laws they will enforce and which ones they won’t. Animal Control needs to enforce the law or have the law changed. Those dogs have matted fur and look like they’ve never had a bath. My rescued dogs get bathed and… Read more »

I adore huskies and have two wonderful ones myself, a female a neighbor gave me after she was unable to breed her further, and a gorgeous male I found late last January walking the mean streets of Lancaster. “Knucklebrain”, aka Gunnar, was probably abandoned by a breeder with too many… Read more »

California 2006 Health and Safety Code, Division 105, Part 6 Chapter 8. Dog Tethering (b) No person shall tether, fasten, chain, tie, or restrain a dog, or cause a dog to be tethered, fastened, chained, tied, or restrained, to a dog house, tree, fence, or any other stationary object. http://www.unchainyourdog.org/Laws.htm… Read more »

Benett, is dog lover correct about this law? I have seen so many dogs tied and chained in the valley it’s amazing to hear it’s unlawful.

Trouble….Here’s what to do…at least in my town in Inyo County..if you see a dog tied up in a yard,and especially if it’s tangled and away from it’s water and food….report it to Animal Control…and continue to do so untill the problem is rectified…..been there,done that…more than a few times…we… Read more »

Maybe it’s time to set the dogs Free. I have seen them on many occasions chained up all day out in the heat. These poor souls deserve better. Maybe Mr. Quiment needs to find them a better home and get a more Humane job.

Here we go again with the bitching about dogs that are bred to run, have a very social life and are better cared for than many dogs! If genuinely concerned, how many dogs have you rescued? If none, then your just hypocrits with too much time on your hands. Kind… Read more »

Dogs that are bred to run NEED to run and not be tied up for months and months waiting for enough snow.

The hypocrite is actually Mono County Animal Control. And I don’t complain about the Worlds oil consumption, global warming, or climate change.

Enforce the law, or change the law.

No one is finding these dogs in a drain pipe, badly injured after falling out of some idiot’s pickem-up truck.

Btw BK, any word on the pit bull mix service dog that jumped out of the dog walkers SUV when the door was opened?

One more siting, but nothing yet.
BK

The word is “sighting”

Sigh. At least he is still alive. Please keep us posted on the search for this doggie. Some of us think about him out there alone in the woods with a leash dragging behind him and all the dangers inherent.