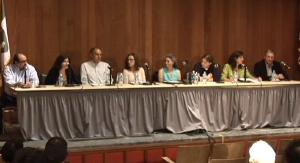 Having been to quite a few Candidate Forums in Mammoth Lakes this election season I found Tuesday’s event put on by the Mammoth Lakes Young Professional’s Group and Mammoth Forward to be the most informative, and the most entertaining (by far). The reason for this all comes down to the format. The forum was broken into four parts; Quick fire questions, audience questions, a segment for candidates to ask each other about the issues, and a one minute closing statement.

If you have ever attended one of these forums or even watched a National debate on television you may have become frustrated by seeing these politicians asked specific questions only to give very nonspecific answers. But hey…..that’s what politicians do. They either don’t want to alienate voters by giving their real views on a topic or (more often than not) they don’t have a clue what they are talking about and hide that fact by spouting out campaign rhetoric. This is why I found the Quick Fire segment of last night’s forum so refreshing. Instead of letting these wannabe politicians behave like real politicians, the Quick Fire portion demanded a simple yes or no answer. The comedy laid in watching these folks (who I commend for running) try to answer these questions in just one word. To be fair (sorry Rick Wood), not everything can be answered with a simple yes or no. Most of these topics are very nuanced and do deserve some discussion. However, I enjoyed seeing these candidates being forced to take a position on certain issues.

I will now give you the exact questions asked and the candidate’s responses in the form of a yes or no. Of course some candidates would respond with answers like, “generally yes,” or, ”sort of yes.” But since the format demanded a one word answer that is all I will include in this article.

Question #1- “As a Town Council person would you support more police officers?”

All candidates responded with, “Yes.”

All candidates responded with, “Yes.”

Question #3- Paraphrased, “Would you support a better police facility?”

All candidates responded with, “Yes”

Question #4- “Would you have supported T-bid?”

The only candidate to say “No” was Karen Sibert.

Question #5- “Would you support a roundabout at Meridian and Minaret Road?”

The only candidate to say “No” was John Wentworth.”

Question #6- “Are you sorry you ran for Town Council?”

Question #7- “Have you enjoyed the election process?”

The only candidates to say “yes” were Ken Murray and Cleland Hoff.

Question #9- “Do we need to hire an Economic Development Director?”

The only candidates to say “no” were Cleland Hoff and John Wentworth.

Question #10- “Should there be a dress code for Town Council Meetings?”

The only candidate to say “no’ was John Wentworth.

Question #11- “Should we explore contracting with the County for law enforcement?”

Wentworth, Fernie, and Sibert said “No.” All other candidate’s said “yes” but they also all cheated by prefacing their answer with the word, “explore.”

Question #12- “Should we move to an elected, strong mayor type of government?”

That was the end of the Quick Fire portion of the evening but that segment seemed to inspire an audience question that was posed to all of the candidates.

Audience Member Question- “ Yes or No. Do you support nightly rentals in established residential neighborhoods? “

The candidates hemmed and hawed over this one, understandably stating that this question deserved more than a one word response. But to the delight of the audience they were forced to go down the line and answer. They were given an opportunity to clarify later if they wished to do so. I will not clarify in this article but I do encourage you to ask for clarification from the candidates themselves. All candidates said, “No,” with the exclusion of Deb Pierrel who responded by saying, “Sorta yea.” We took that as a “yes.”

It is hard to answer with a simple yes or no…..if you are a politician.

roundabout at Meridian and Minaret Road?

I see carnage during a Christmas time major storm.

I hope there will be a way around it 🙂

ram: No worries. It will never happen. The candidates just tell the media and those present what they want to hear. Just like politicians everywhere. Lie to anybody to get elected.

But it would be fun to watch the demolition derby and the sprinting pedestrians.

Round about would be great for that intersection. That light is terrible. I am surprised that came up I have been thinking that is needed.

I sure wish they would have used this forum for the two sheriff’s candidates. That would have been really interesting.

I hope they continue this method in other elections.