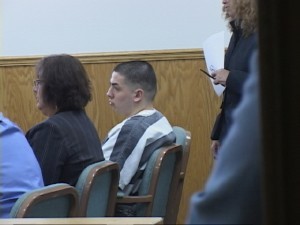 Elizabeth Corpora had earlier broken her ankle and requested a postponement of the original August trial date.

Corpora had won a change of venue for Leplat when she argued pre-trial publicity and the fact that a second murder case of a similar nature in Bishop would prejudice jurors. Judge Brian Lamb agreed and granted the motion.

Pre-trial motions are scheduled to be heard October 5th in court in Independence. Sheriff’s officers arrested Leplat in June of 2009 in connection with the stabbing death of a 23-year-old Bishop man on the Indian Reservation.

A judge has been assigned to Leplat’s trial. She is Judge Kathryne Ann Stoltz.

We work to provide daily news to all of the Eastern Sierra, in the tradition of Eastern Sierra News Service and the Sierra Wave. We bring you daily happenings, local politics, crime, government dealings and fun stuff. Please contact us.
View all posts by News Staff →
Snow Redux
Cerro Coso Student Charged with Possession of Weapon