Inyo County Board of Supervisor Chair Matt Kingsley started Tuesday’s special meeting expressing his pride and appreciation for the people who volunteered to take the helm of the embattled Southern Inyo Healthcare District. “This is not an easy appointment,” he said. “The district is struggling on many levels.” 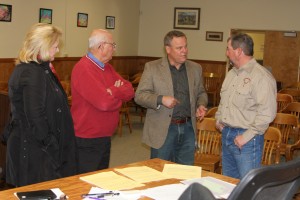 Three south county residents had expressed an interest in the board positions prior to the meeting: Jaque Hickman, Mark Lacey and Richard Fedchenko. Three others submitted letters of interest after the meeting agenda was set: Keith Franson, Dave Woodruff and Michael Dorame. The Board went with the original three.

Those three will get their baptism by fire at a closed session meeting at the hospital Wednesday, Dec. 30, starting at 1 p.m., followed by a public meeting.

Just before the Supervisors voted on the appointments, County CEO Kevin Carunchio was asked to give the potential board members a brief outline of what lay in store.

“Nobody in this county is an expert” in health care issues, he said. “We’re trying to jump in and do what we can. The State is not going to come in and hold your hand. The finances (of the district) may be hard to even figure out. There are questions of licensing,” basically can the hospital suspend the licensing on some areas of service the hospital has provided and keep other parts alive. Carunchio kept on with his litany of district issues. “There has been no point of contact between the State (Department of Public Health) and the district” following the resignation of CEO Lee Barron and the former five-member board. “You’ll need to resolve hospital management, administration and legal support, including possible Chapter 9 reorganization. You’ll need to get services with no knowledge of your resources. Oh, and for-profit (hospital) folks have been sniffing around.”

To their credit, none of the potential board members fled the Supervisors’ chambers.

Registrar of Voters Kammi Foote defined the five districts that make up SIHD; Lacey and Woodruff both resided in District 1. Woodruff withdrew his name in preference to Lacey. Hickman was the only resident of District 4 to apply, leaving Fedchenko, Dorame and Franson all willing to represent District 2. The Board appointed Fedchenko. The three will face formal election on the next ballot.

The only question was in reference to the two empty seats in Districts 2 and 5. County Council Margaret Kemp-Williams’ opinion was that the three new board members could not fill the two positions by appointment. Foote’s interpretation of the codes was that they could. Brown Act restrictions, outlined by Williams, make it impossible for any of the three board members to discuss any district-related issues outside of an agendized public or closed session meeting. With a full board, discussions among two board members are allowed as those two do not represent a quorum, or majority, of the board.

One Response to New SIHD board members sworn in