By News Staff on June 11, 2013 in Government Agencies/Utilities 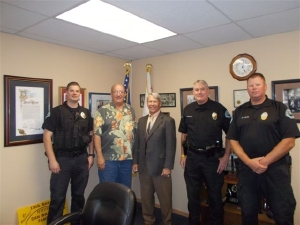 Chief Watson said, “Reserve Officer Worcester brings a wealth of experience to the MLPD.  With the recent loss of seven sworn officers, we are very pleased to have him on our team.”

Officer Worcester and his wife are part time residents of Mammoth Lakes.  They have three children.  Reserve officers are required to work a minimum of two shifts a month and he will be working patrol and special events.  Reserve officers are paid up to $25 an hour.  Anyone interested in learning more about the MLPD Reserve Program should contact Sergeant Rick Moberly at (760) 934-2011.

Not another public employee?

Uh-oh!
Now watch for the usual bitching: “I don’t want my tax dollars to go towards another big salary of a public employee!”