By News Staff on November 12, 2013 in Government Agencies/Utilities 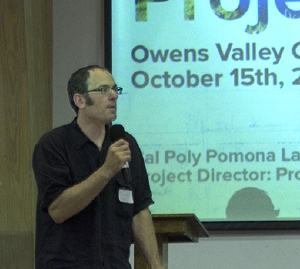 Would Los Angeles ever consider an equal relationship with the Eastern Sierra?  One based on mutual benefit?  At Cal Poly Pomona, there are those who think it is possible.

For the past year, Master of Landscape Architecture students from Cal Poly Pomona held workshops in the Eastern Sierra and examined the Los Angeles Aqueduct and its impacts here. Now, an exhibit in LA City Hall reveals those impacts and proposals to remake the relationship of LA and Inyo-Mono.

It’s called Aqueduct Futures which is on exhibit through December 6th. Assistant Professor of Landscape Architecture Barry Lehrman hopes the project will lay the foundation for peace between LA and the Owens Valley. Sounds like a stretch of the imagination to most here, but Lehrman says he and the students will start to “develop the framework to empower the Owens Valley and Mono Basin to have control over their landscape.”

Lehrman said the cost for LA to treat Owens Valley like a water colony is substantial impacts which “may not be in LA’s best interest.” He called LA land ownership here a “huge conflict of interest.” Lehrman pointed to the 500 square miles LA owns and said, “DWP is not good at property management.” He said their primary purpose is to provide water to LA. Said Lehrman, “DWP is awful at management of resources. They are best at generating water and power.”

Though it may sound like wishful thinking, Lehrman says that economic development here is not at odds with water for LA. He said, “They think they will lose water with every flush of a toilet in the Owens valley, but that water eventually makes its way to LA.” Lehrman said LA needs to think about the fact that water is used several times.

As for the cost to mitigate the legendary dust at the Owens Dry Lake, Lehrman said, “That’s what it costs to do the right thing.” He also said that to treat the Owens Valley as an equal would be a benefit to Los Angeles.

Back to land ownership. Lehrman said if not to use land to manipulate the people in the Owens Valley, why should DWP own it? He called water use for modest growth in the 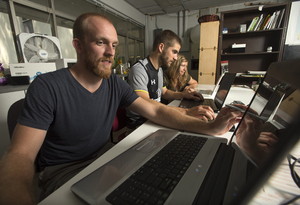 Owens Valley “insignificant” compared to water use in LA for more than 3 million people. Said Lehrman, “There is no reason the Owens Valley can’t be allowed to have some growth with no substantial impact on LA.”

Lehrman and students have come up with ideas for recreation management of Owens Valley land, possibly a National Recreation Area designation along with local development. He said along with plans to revitalize the LA River, the Owens River is “worthy of equal treatment.” He said the 21st Century is about parklands and open space.

Lehrman said the time is right and discussions have begun in LA to focus on the ethical and moral treatment of the Eastern Sierra by Los Angeles. LA City Councilman Tom LeBonge sponsored the Aqueducts Future exhibit, and Lehrman hopes to have discussions with other leaders, including Mayor Garcetti. Lehrman said it’s time for LADWP to end its “culture of denial” when it comes to the big city’s water source.

Joe P-
Sometimes a fresh perspective on things is the most useful. Many inventions and breakthroughs have been brought forward by people from the outside as they can step back and look at the forest instead of focusing on the trees.

“They think they will lose water with every flush of a toilet in the Owens valley, but that water eventually makes its way to LA.”

So what are a landscaper’s hydrological bona fides to make such a statement?

Professor of Landscape Architecture? He has no business in land management, that belongs to natural resource or range specialists. This dude is just blowing a whole bunch of hot air. Sounds like a boondoggle to fatten his research budget. Look at me! I’m going to save the Owens valley!

Hey Joe P, Barry Lehrman has plenty of bona fides. His vision and the creation of the multi- disciplined program at Cal Poly Pomona of Aqueduct Futures can be seen at their website: http://www.aqueductfutures.wordpress.com. Cal Poly Pomona, it’s programs and it’s graduates are highly regarded. It may not have the… Read more »

I like small town and everything that goes with it. I like the open spaces around my small town, when I hear someone say national recreation area I think more law enforcement looking over my shoulder, more road closures, more people trying to boss other people around.Although I’m not to… Read more »

Sounds great, but DWP will have to relly step up to the plate and deliver some real changes before the Owens valley will have a better feeling towards the aquaduct and ground pumping. 100 years of destruction and total disregard for the enviroment has gotten us to this place in… Read more »