As Mammoth Lakes officials work on the town’s first-ever medial marijuana dispensaries, the issue of legalization of 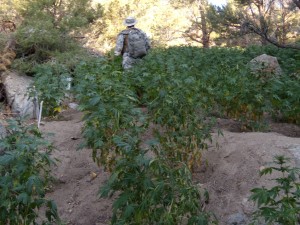 marijuana builds interest. Capitol Television News Service reports that Proposition 19, the measure to legalize personal use of marijuana in California, has jumped ahead according to a new field poll.

The survey shows 49% of those questioned now support Prop 19 while 42% oppose the measure. The poll also found that Californians have become steadily more permissive toward the drug since pollsters began quizzing state residents about their attitudes 40 years ago. Proposition 19 goes before the voters November 2nd. It is unknown how potential passage of this measure might impact the whole issue of medical marijuana dispensaries.

Dennis Peron, the San Francisco activist who worked to legalize medical marijuana is quoted in the San Francisco Union as saying, “I’m just against the whole concept of the recreational use of marijuana.” Others point out that federal law still finds marijuana illegal which could present some conflict for California of pot were legalized. Still others say that legal marijuana sales would create a much-needed source of new taxes for the state and for cities.

Some law enforcement favor Prop 19 which would effectively take marijuana out of the hands of drug cartels and drug gangs. Still others in law enforcement have stated that if marijuana were legal, more people would buy it and low-income people may spend money on drugs and not food.

Under Prop 19, adults 21 and older could possess up to an ounce of marijuana for personal use and grow gardens up to 25 square feet. Richard Lee, an Oakland medical marijuana entrepreneur spent a reported $1 million to get the mesure on the ballot. He has stated that legal marijuana would help the economy and help close the state’s huge budget deficit.

We work to provide daily news to all of the Eastern Sierra, in the tradition of Eastern Sierra News Service and the Sierra Wave. We bring you daily happenings, local politics, crime, government dealings and fun stuff. Please contact us.
View all posts by News Staff →
Mammoth Planning Commission Will Deal with Medical Marijuana at October Meeting
Bureaucrat Beat: Blond and Useless, Outsource Oddities, and High Chairs