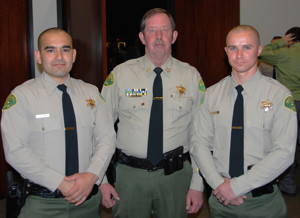 We work to provide daily news to all of the Eastern Sierra, in the tradition of Eastern Sierra News Service and the Sierra Wave. We bring you daily happenings, local politics, crime, government dealings and fun stuff. Please contact us.
View all posts by News Staff →
Bureaucrat Beat: in cerveza veritas, first amendment zone?? and promises
May 6th Mammoth candidates forum
2 Comments
Newest
Oldest Most Voted
Inline Feedbacks
View all comments

From a retired Deputy Sheriff of 30 years, my congratulations to both of you…You are beginning the start of one of the most difficult, but yet many times rewarding careers. Always serve the citizens of Inyo County with the utmost in honesty and respect.. Always remember and never forget to… Read more »

Good Job Madera and Hoodman, you both will be an outstanding addition to ICSO.