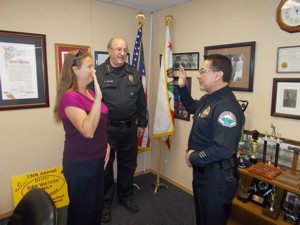 For the first time in more than 5 years, the Mammoth Lakes Police Department (MLPD) has hired a new, full-time police officer.  Jack Loera was sworn in by Town Clerk Jamie Gray and presented with his police badge by Police Chief Dan Watson during a short ceremony at the Police Station on Monday, September 30.  Officer Loera is a 17 year law enforcement veteran, most recently with the Banning Police Department.  Officer Loera previously served in the Beaumont and Upland Police Departments.

The MLPD suffered severe cutbacks in staffing as a result of the MLLA lawsuit settlement.  At one time there were 23 MLPD officers.  During the 2012/13 fiscal year, the Police Department went from 17 sworn staff to 10, a 41% reduction.  In the Spring of 2013, the Town Council authorized carrying over savings from the Police budget to allow for the funding of an officer for at least 19 months.  Officer Loera was selected to fill that position.

Once Officer Loera completes his field training, he will be assigned to the Evening shift on the weekends.

to each his own

As a person cursed with an open mind, I once tried to understand what would motivate an individual to want to listen to the negative anti-government (anti-liberal/anti-Democratic party) rants by the likes of Rush Limbaugh for 3 hours a day. Quite honestly, I could only take a few moments of… Read more »

Tea Party Tom
Reply to  to each his own

Nobody listens to, or is influenced by, Rush Limbaugh.
(uncontrollable laughter)

Some give LIVE a thumbs down

There are some amongst us who give LIFE a thumbs down.
They spend their waking hours glued to radio shows such as The Rush Limbaugh Show
and for some odd reason believe this sort of hate-mongering activity allows them to vent their frustrations with life in general.
Pity them.

Why would anyone give a thumbs DOWN for saying congratulations ??? TWO people… REALLY ?

It is easy to hit the wrong icon on a cell phone. Whole thumb thing is a bit ridiculous.
Good to see TOML hiring working people.