By News Staff on October 1, 2014 in Government Agencies/Utilities 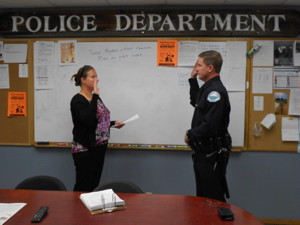 On October 1, 2014, the newest member of the Mammoth Lakes Police Department was sworn in by Police Chief Dan Watson.  Officer Robin Henry will fill the vacancy created by the retirement of longtime MLPD Officer Luke Schwarzkopf, who will be retiring at the end of October.

Officer Henry has 13 months of prior law enforcement experience with the Susanville Police Department.  Prior to that, he spent many years with in the golf industry, having served as course superintendent at several golf courses.

Officer Henry is 49 years old and the parent of two children.

Susanville police department lost a very good officer. Not only the department but the city it’s self, officer Henry was great at what he did, even for being new. He always checked in the businesses that were open 24/7 he made sure that they knew he was there. He wouldn’t… Read more »

Why did a great officer like Luke retire early?

Thought he would be a wonderful replacement as Chief when Watson leaves in Dec.

You know, promote from within and all that stuff!

Very happy to see MLPD getting some additional help, even though it is replacing someone. At least they are not cutting the department any more. Welcome to Mammoth Officer Henry.