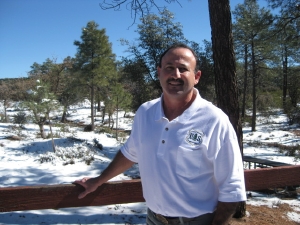 working collaboratively with others to find common ground solutions.

Armenta fills the vacancy left by previous Forest Supervisor Jim Upchurch. Armenta currently works as the District Ranger of the Payson District of the Tonto National Forest in Arizona. Officials said of Armenta that he has been “actively engaged in EEO and Civil Rights programs and has a strong fire and fuels management background.”

The new supervisor’s background includes a degree in Widllife Management at Humboldt State University, work with the Forest Service as a wildlife biologist, work on the Plumas and Sequoia Forests.

Armenta and his wife Tambra have three grown daughters and one granddaughter. He will go to work on the Inyo Forest sometime this spring. Until then, Jon Regelbrugge will continue to serve as Acting Forest Supervisor.