By Charles James on January 5, 2021 in General Misc. Stories 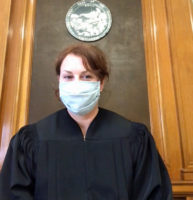 On Monday, January 4, three county district supervisors were sworn in by the county’s new superior court judge, Susanne Rizo, who had been sworn in earlier in the day. Jeff Griffiths and Matt Kingsley were reelected to the Second and Fifth Districts, respectively, while the new “kid on the block,” newly elected fourth District County Supervisor, Jen Roeser, was also sworn in.

It was all done mostly “virtually” on Zoom, as is almost everything these days, with some 55 participants joining the session online.

Judge Rizo is a former Inyo County employee as the regional director for the Eastern Sierra Child Support Services, a fact that would be noted later by Matt Kingsley in his remarks.

Rizo noted that, in their jobs, the supervisors have a “direct impact on the citizens of Inyo County,” and that their leadership was important “during these trying times.” 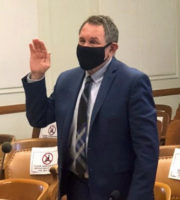 Once sworn in, the supervisors were given the opportunity to make a statement. Three-term supervisor and current chairperson of the Board, Matt Kingsley, started the ball rolling by saying how he “looked forward to serving his district for another four years, as well as working with the current board members, and the new board member (Jen Roeser).”

Kingsley spoke to the importance of “developing relationships with outside entities, constituents and other agencies.” And that those relationships were important because even during a pandemic, “the issues that we’re working on haven’t changed.”

One aspect of the changes brought about by the pandemic said Kingsley, was that his district is spread out and the virtual meetings “allow his constituents to watch and participate.”

Jen Roeser takes oath of office as new Fourth District Inyo County SupervisorJen Roeser was a delight to watch as she enthusiastically embraced her position as a new county supervisor by stating that she doesn’t think there’s any greater honor than representing people who have placed their faith and trust in her to do a good job for them, to be accountable and to be transparent. She also paid tribute to those that had come before her.

Roeser mentioned that she had had an opportunity to attend some classes from the Institute of Local Government and the California State Association of Counties to prepare for the job of a county supervisor. There was a “white paper”, she said, that really made her think about research indicating a decline in the popularity of democracy at home and abroad, and that it was local government that provides the foundation for democracy. “We are the standard bearers for democracy locally and in our state and nationally,” said Roeser.

Griffiths noted that he cannot be prouder of his community and added that he was also “proud of Inyo County employees, from the department heads to the rank and file, who have performed so amazingly.”

Tomorrow regular Board of Supervisors meeting will be new
Fourth District Supervisor Jen Roeser’s debut. A lot of people are looking forward to it.