Cancer patients receiving chemotherapy are often facing the greatest challenge of their lives. Care providers at Northern Inyo Hospital’s newly expanded Infusion Center plan to do everything they can to make the experience as comfortable as possible. 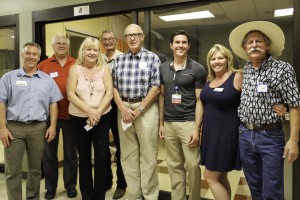 Recently relocated into a larger space within the older main hospital, the expanded facility will open for service Monday, Aug. 24 at 8 a.m.

Infusion patients with scheduled appointments for Aug. 24 are asked to park in front of the hospital’s West Line Street entrance and check in with Central Registration in the main lobby. They will then be escorted to the new location.

The new Infusion Center features five private treatment bays furnished with large reclining chairs and wall mounted televisions. Adjustable gurneys are also available for those preferring to lie down. For those seeking a more social setting, the bays are large enough to allow some family or friends to sit with the patients and chat or watch television together.

Perhaps the most inspiring aspect of the facility is a simple, yet elegant, silver bell, donated by the Northern Inyo Hospital Auxiliary. Those completing their therapy may ring the bell, a symbolic end to an often life-changing journey.

Hospital employees and members of the public got a sneak peek at the new facility last week during separate receptions. The public reception, hosted by the Northern Inyo Hospital Foundation, drew about 50 people to the facility.