On Monday, California Senator Diane Feinstein introduced a new piece of legislation designed to protect large areas of the Southern California Desert. The main thrust of the proposed legislation is to create two new national monuments in the Mojave Desert, but there are a few proposals in this sweeping legislation that could have effects on Inyo County. 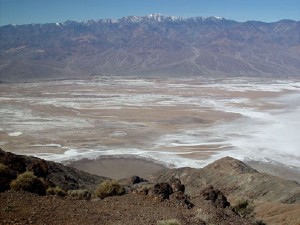 In what will likely be a controversial move for OHV users, Surprise Canyon in the Panamint Mountains is slated to become a designated Wild and Scenic River. This could be the final nail in the coffin of desires to re-open the old but washed out road to the Panamint City ruins.

In the Tecopa/Shoshone area, the legislation calls for an addition to the Wild and Scenic River designation on the Amargosa River.

In other areas of Death Valley National Park, the changes appear to be minor. A BLM administered strip at the southern end of the park adjacent to Fort Irwin is slated to become part of the park. The road into the Owls Head region is set to remain open.

An area off the Big Pine Road that used to be a sulfur mine is set to become part of the park. There is also a strip set to become wilderness in the Panamint Valley at the base of Townes Pass, and another area in the north end of the Eureka Valley is set to become designated Wilderness. Terry Baldino with Death Valley National Park says that no roads that are currently open are set to be closed by this legislation.

Of these proposals only the Great Falls Basin is in the newly proposed legislation for wilderness designation. The proposal to create additional national monuments has created controversy over what would mean the inability to create solar and wind farms in these areas. Interests representing renewable energy have come up against land conservationists on this one.

We work to provide daily news to all of the Eastern Sierra, in the tradition of Eastern Sierra News Service and the Sierra Wave. We bring you daily happenings, local politics, crime, government dealings and fun stuff. Please contact us.
View all posts by News Staff →
Mono Supervisor to be Appointed by the Governor
Police Handle Bar Fights, Vandalism and Assault During Holiday