By News Staff on June 23, 2014 in Government Agencies/Utilities 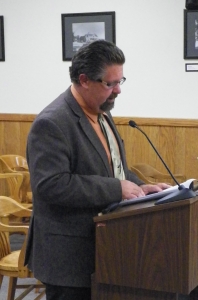 As a mitigation in the Inyo-Los Angeles Long Term Water Agreement, the County took over the town water systems in Lone Pine, Independence and Laws. These were areas that suffered severe groundwater pumping and a lowering of the water tables. The idea was to keep water rates low so residents could irrigate more. The County thought Community Service Districts would take over the systems. That did not happen. Recently, The Supervisors approved a new contract with Wilder-Barton, Inc. for operation of the systems.

At first look, it appears the County saved $135,000 per year in the three-year contract. Public Works Director Clint Quilter made it clear that this contract, unlike the one with Owenyo, does not include payments for unknown circumstances. Also, the County will maintain some responsibility to do work on the systems or hire other contractors to do work. So, the actual savings will likely be less.

Quilter said County officials made sure there were no redundancies in the contract and they indicated there will be no consideration of rate increases for a year. It is the County that sets the rates. Patricia Barton, who co-owns Wilder-Barton with her brothers, said it would be “a long process” to analyze the system and determine if rate increases are needed. She said there are no immediate plans for substantial changes. She said Wilder-Barton will have a better understanding of the systems once they operate them.

Inyo Supervisors see the new contract as part of Service Redesign in which the County will pay less money. How much less depends on “unknown problems”.

I live in Inyo County and have a private water company that I pay. At the same time, residents in southern inyo have a subsidized water system, of which being a taxpayer, I pay for as well. It’s time to turn these water systems over to a private company, Service… Read more »

Ted, Independence and Laws are not considered Southern Inyo. Lone Pine is Southern Inyo. I was never a fan of letting these towns and Inyo Co take control of them. It let DWP off the hook so DWP stopped doing the maintenance long before the hand over.

I agree with you Steve, it was a bad move.