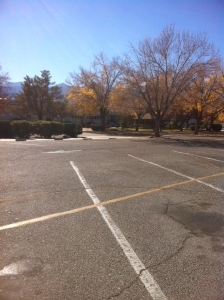 One site would locate new court behind Bishop City Hall.

Last year, the State scratched Inyo County’s new and expensive court building project. Then they picked it up again but scaled it back. Now, apparently the State will go ahead with a $34 million building in Bishop. The State Public Works Board met last Friday to consider two properties in Bishop as possible sites for the new Courthouse.

Keby Boyer of Judicial Council Communications said that one site is owned by the Department of Water and Power at the northwest corner of MacIver and Spruce Streets. The other potential Bishop site is owned by the City of Bishop and sits between Fowler and Warren Streets behind City Hall.

A year ago, the State struggled with chronic budget problems but decided to spend money on new court buildings anyway. Inyo Court officials had told the Judicial Council that Inyo needs the new building because of security, overcrowding, lack of ADA accessible courtrooms, and the physical condition of the buildings.

Some three years ago, the plan was to place the new court building in Independence. Plans suddenly switched at one point. Southern Inyo citizens and others protested the switch and criticized the County for failure to maintain the historic courthouse.

The agenda of the State Public Works Board says the MacIver Street location would involve around 1.45 acres. The City of Bishop-owned site would be around the same size. The State would appropriate roughly $1.5 million on either site. The current estimated project cost adds up to over $26 million, and the State has authorized nearly $34 million.

The project schedule calls for escrow closure by next December, construction in January of 2017 and completion by the fall of 2018.

Great, now we’ll have three court houses for two bonehead judges. Maybe we can make a strip club out of one of the vacant courts.

The site on MacIver really makes no sense to build a courthouse- it’s in a residential and commercial area. The site across from the current courthouse is much more logical since there’s already a courthouse and city hall there.

This thumbs up/thumbs down thing is lame, you are commenting without saying anything. Why not really comment and explain your feelings? This way we can engage in discussion that may change my thoughts on the subject. You can make up a name or whatever, I do not care who you… Read more »

Mongo, hope this info helps you; the “thumb counters” on this site have not work properly for a long time. The tabulations are not accurate. I appreciate the level of your sarcasm, but just in case your above post regarding “pessimism” signs is real…. Try replacing those words with photos… Read more »

Russ, What are the thumbs up and down functions not doing? I never deal with them but can ask our webmaster to deal with it.
Thanks,
Benett

A portion of the articles posted come on with the “Like or Dislike” icons already “dull” indicating that a given computer has previously voted and not allowing further voting. When the articles does allow a ‘vote’, the icon should turn to a green check and the number should rise. Often… Read more »

Strange. I just tried it, and it did register. Will look further.
BK

If you’re a Schat.net customer for internet service, you may not be able to vote because another Schat.net customer with your IP address has already voted. All of these customers share the same IP address, and the comment software is using that address to identify voters and not allow them… Read more »

Sounds like a good probability to me Tom. I have heard the same complaint from people not on Schat, but they are also on remote area networks that may also share IP addresses.

Thank you Russ… What are your views on moving the courthouse out of Independence? Do you know what will become of that beautiful old building? Also, thanks for your super constructive suggestion, I’ve been down in the dumps lately with a tri-fold difficult combination of life and appreciate that you… Read more »

Mongo, The old courthouse will continue to be used to some extent. The library is there and so are County Clerk-Recorder, Auditor and Treasurer. Sounds like we need to do a story on this. Continued loss for Independence where abandoned businesses and store fronts are common. No reasonable growth for… Read more »

I love Independence and think it is a mistake to DE-emphasize it as the county seat from a historical perspective. In my selfish hypocritical opinion it dilutes the history of one of the Wests earliest settlements. Essentially, when the county moves out of a county seat and relocates to a… Read more »

The Sheriff’s Office and others have tried more than once to help him. He has refused.
There currently are no shelters for the homeless here.
BK

In 19th century San Francisco there was a character similar to MR Homeless. He was self appointed Emperor of The United States and protector of Mexico; Emperor Norton was his name. http://en.wikipedia.org/wiki/Emperor_Norton Perhaps Mr. Homeless needs to be offered a position of dignity and importance such as Emperor of Independence… Read more »

JeremiahJoseph
Reply to  Mongo The Idiot

Your right Mongo, People are so complacent within their own bubbles, it seems finding people to have a civil discussion is seldom seen, also the fact we have the ability to block out any logical or rational argument that we don’t agree with and continue to live our lives not… Read more »

Then there are those that actually believe they are doing some sort of bizarre civic duty by blaming every societal ill on “the liberals.”
LOL!

If they locate the new courthouse in Bishop behind City Hall, where will the high school kids park during the week and the church-goers on the weekends? There’s not enough street parking in that area for the residents already!

What about the homeless dude who has slept outside for three consecutive winters in front of Subway, will they move him to Bishop also? I put signs all over my house that say “stop being so pessimistic” unfortunately I had to take them down because I am sure they won’t… Read more »

What will happen to the old court house?
Are they going to kill Independence?
Will they move the Museum and Slim Princess too?