Mammoth’s Town Council and newly elected Councilmen sat down for a workshop on the new budget Wednesday. Councilman-Elect Rick Wood wasted no time to break from the past. 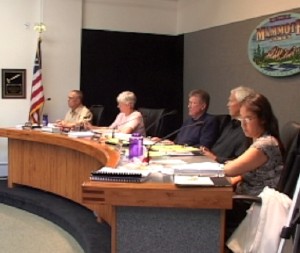 Image of Mammoth Town Council Budget Workshop on Wednesday as aired on the Town website.

Wood told the group that they all need to talk about their own priorities, agree on them and then base the budget on that, rather than just accept what’s already put together. Others seemed to go along. Wood pointed out that the budget as it is now may not include items considered important to new officials.

I spoke to Wood after the workshop. He said that he and new Councilman-Elect Matthew Lehman are meeting with the citizens group, Future of Mammmoth, to seek expertise on issues. Wood said the way the Town budget is put together “looks like the past.”

He and Lehman met with the group of about ten citizens. Wood said all agreed the current budget is not readable. “Since the budget was an issue in the campaign,” said Wood, “we’ll examine it.” He said the issue is transparency. Wood said he believes the process needs to start with the Council who gives the staff priorities not the other way around.

“I proposed we talk openly about what we want and in what order. Then we create a budget on the consensus of priorities of the Council.” Wood said he will also ask that the budget be made more “user and citizen friendly.” He pointed to the Park City Citizens Budget. “It tells people in plain language what’s going on,” said Wood. He wants people to be able to go on a website and see what the Town has, will spend and on what.

Wood said he’s pleased the elected councilmen were invited to the budget workshops. “It sets a new tone,” he said.

As for a working budget so elected councilmen can have a say in the new budget, Wood suggests continuing the old budget for another month. Wood added that he doesn’t want the new Council to look like the old one. “We ran on change, and I think things will.”

We work to provide daily news to all of the Eastern Sierra, in the tradition of Eastern Sierra News Service and the Sierra Wave. We bring you daily happenings, local politics, crime, government dealings and fun stuff. Please contact us.
View all posts by News Staff →
Three-Year-Old Drives Car into Ditch
Bureaucrat Beat: Inyo Neglect, Walmart Foe, and King Man