By News Staff on September 4, 2013 in Government Agencies/Utilities 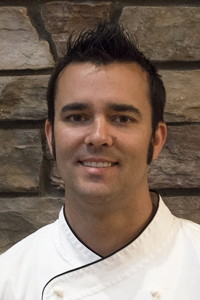 Chef Jeremy, a graduate of the Scottsdale Culinary institute, will bring to the restaurant a cooking style that includes classical French techniques combined with an eclectic fusion of European and Asian cuisine to showcase the natural flavors and vibrant colors of food. Chef Jeremy believes in an all-natural approach with simplicity being the key to bringing out the true beauty of food.

Chef Jeremy is also in the process of continuing his certification for Master Sommelier. He will create much of his cuisine with an eye toward wine pairings.

Since giving up his stone and tile business to pursue his love of cooking full time, Chef Jeremy has graced the kitchens of some of the most prestigious golf clubs and resorts in the Southwest and California including, most recently, North Ranch Country Club in Westlake Village, California where he served as the Executive Sous Chef. Prior to his time there, he served as Sous Chef at Waldorf Astoria’s La Quinta Resort PGA WEST Private Clubhouse at La Quinta, California and as Chef De Partie at The Phoenician Resort’s Terrace Restaurant in Scottsdale, Arizona.

We work to provide daily news to all of the Eastern Sierra, in the tradition of Eastern Sierra News Service and the Sierra Wave. We bring you daily happenings, local politics, crime, government dealings and fun stuff. Please contact us.
View all posts by News Staff →
Time for a new friend
Guided bird tour Saturday September 7