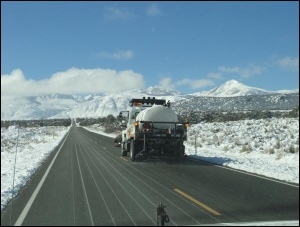 Mixture of water and sea salt is 20 times more effective than salt alone, better for environment, and cost effective

BISHOP – For the first time in Mono and Inyo counties, Caltrans has begun using an anti-icing solution called salt brine on state highways in the Eastern Sierra that melts snow more quickly and reduces the chance of dangerous ice forming on the pavement.

“This is a win for everyone. We’re making winter driving safer for the public, and we’re also saving taxpayers money,” said Caltrans Director 9 Tom Hallenback. “It takes four times less salt to prevent ice from forming than to remove the ice after it has formed.”

Salt brine is also more environmentally-friendly – one-third less salt is used in the mixture when compared with other methods – and highways and bridges treated with brine will resist frost for several days per application. This decreases the length of time chain controls are in effect, the amount of traction sand used, and highway workers’ exposure to moving traffic.

a proactive approach to winter road maintenance called anti-icing. In the same way that a light coat of cooking oil in a frying pan prevents food from sticking, the salt brine treatment prevents significant amounts of ice from building up on highways, making them easier to plow.

I wonder about the runoff and the effects on the streams/lakes.

I talked to Caltrans Public Relations – Florene Trainor. she points out that the new method uses 1/3 less salt than all the many years before when Caltrans used salt mixed with cinders. She said it is a less corrosive way to take care of icy roads and more environmentally… Read more »

Salt has been used on 395 for the last several years. This is nothing new. Caltrans mixes it in with the cinder that they spread on 395. This leaves a whitish/pink color on the road and vehicle. I have been very concerned about the effect on environment and our vehicles… Read more »

Have you ever seen a dark car with white spray all down the side after a storm? That’s salt. They have been using it around here for decades. This is just a newer more efficient method.

This is of great concern to me. Salt brine on roads causes major damage to your car! According to AAA: “Even in the dead of winter motorists should regularly wash their vehicles to prevent rust and paint damage to the chassis and to forestall brake line and fuel line corrosion,”… Read more »

It’s going to tear them up like the ones on the east coast. I was wondering what the lines were on 395. Mystery solved

What’s all the salt going to do to our cars?? Some of us drive that road everyday.

I would rather wash my car more often instead of prying it off a tree.

Not so easy to wash your car when your driveway is covered with snow; it’s 30-40 degrees; the water to the outside faucets is turned off.

Oh poor Ken… Is that a little violin I hear in the background?

No. Those are just your usual head noises and voices telling you to be a jerk.