By News Staff on October 30, 2013 in Government Agencies/Utilities 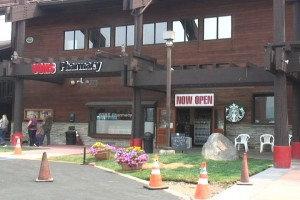 On Tuesday, October 29 the Mammoth Lakes Police Department (MLPD) arrested a suspect in the recent burglary of the Von’s Pharmacy in the Minaret Mall.

After following up on leads, MLPD Detective Doug Hornbeck and Officer Andy Lehr served a search warrant at St. Moritz Condos, #13.  They recovered evidence at that residence and arrested Christopher James Powell, 21, of Mammoth Lakes.  Powell was a Von’s employee and had been working as a cashier in the satellite store that included the pharmacy.

MONET agents assisted in the investigation and service of the search warrant.  They also arrested Randy Rojas, 27, of Mammoth Lakes at the same residence.

Powell was booked into the Mono County Jail.  His charges are 459 PC/Burglary, 135 PC/Destroying or Concealing Evidence and an outstanding warrant from San Bernardino.  He is currently being held at the Mono County jail and his bail has been set at $20,000.

We work to provide daily news to all of the Eastern Sierra, in the tradition of Eastern Sierra News Service and the Sierra Wave. We bring you daily happenings, local politics, crime, government dealings and fun stuff. Please contact us.
View all posts by News Staff →
Note to editor: enormous German Brown trout lives!
Gregory will unveil plans for June Mountain
23 Comments
Newest
Oldest Most Voted
Inline Feedbacks
View all comments

They need to go after the doctors pushing this crap on our kids.

LEO’s need to roll the SWAT vehicle up to the doctors office bash in the front and shoot the doctor like they do with other drug dealers.

Yeah, but they can’t risk getting Rush Limbaugh in crossfire.

Excuse me but though surgeries are, for me, thankfully few and very far between, I very much appreciate the availability of such pharmeceuticals to take the edge off the pain so I can rest comfortably and recuperate. Don’t blithely assume all such meds are abused. Most are not. Or would… Read more »

just keep in mind pharmeceuticals kill more people then all other drugs combined. So I will asume such meds have a high reocrd of abuse.

I hope the defendants get the help they need – IN PRISON!

I just don’t understand. I will use vicodin sparingly after a surgery but really detest the way it fuzzes my mind. I don’t like that feeling at all. What is the appeal?

Not to mention the VERY unpleasant havoc that it wreaks on your digestive system. THAT pain was almost as bad as the pain the vicodin was relieving. just sayin’…

Wayne — while your experience may be true, it is a rare one. People do desperate things for opiates and opiate addiction is extremely powerful. Anyone who has ever had an opiate addiction knows how absolutely gut-wrenching awful it is to go through withdrawals. There’s an epidemic of prescription drug… Read more »

Good job MLPD!
I guess I’d be lying if I said I have no sympathy for these two suspects, I hope they get the help they need.

Just because prescription drugs were stolen,especially in this case where it involved an employee with easy access and knowledge of the pharmacy,doesn’t mean the ones that (allegedly) committed this crime are addicted to prescription drugs…..in my “old life”,I knew of a person that did this very same thing at a… Read more »

Wayne, I’m not sure what the point of your comment is, other than to once again beat the dead horse of refer madness. You’re doing no one a service by discounting the seriousness of prescription drug addiction and it’s related crime.

Wayne’s comment is no discount of seriousness of problem. Fact that these meds are worth stealing shows problem whether thief is addicted to anything or not. Good chance thief was addict, but true things are bartered on street. Dealers often sell drugs they don’t use while they are addicted to… Read more »

Pedro…Thing is,maybe back in the “olden days”,marijuana wasn’t seen,or could be classified as an “addictive drug”….but now,in these days,with the additives and increased potency,it can be for some….and can become a problem for those that use it on a daily,regular basis for a lot of reasons…it no longer sells for… Read more »

Wayne, you’re talking about things you know nothing about. Specifically, what “additives” are you referring to? And please point to a study that shows pot is actually stronger now than it was in the 70’s. There’s no evidence that shows this, just hype from the industry and prohibitionists fools like… Read more »

Another quick note – there is the phenomenon of drugs being habituating rather than addicting. The sensation becomes a habit for some though not chemically addictive.
BK

TBone……It’s obvious your one of those in favor of legalizing marijuana to the point to where if they had their way,you could walk into a quick-stop market and purchase an ounce of weed along with their bottle of pepsi and a pack of skittles….You can stick to your “facts and… Read more »

Wayne, agree that chronic use of anything to avoid life is a problem, especially for young people, as it retards emotional maturity. But as Bennett said, not all substance habits lead to addiction. While the overall strength of weed on the street has gone up, there has always been a… Read more »

“there is the phenomenon of drugs being habituating rather than addicting”

I think they call it psychological dependence.

Golf & Skiing is are good examples. .

All while cigarettes kill daily and remain legal.

I personally like how the DSM separates abuse and dependence. The DSM breaks it down very clearly and makes it easy to see where a person is in relation to the scale with plain language. The link is for alcohol, if you search it you will see breakdowns for other… Read more »

The drug thing just seems like a way for us to divide each other up and separate ourselves from each other. You have the guy who likes his beer, sitting around with the gal who likes her caffeine, and with the one who likes her prozak, hating on the guy… Read more »

I guess it’s possible to overdo anything, even wisdom.