Lighting up Lone Pine with new neon signs bring back memories for many.

An extensive project to restore the town’s classic neon signs has been completed and the reviews from residents and visitors alike are, well, glowing. 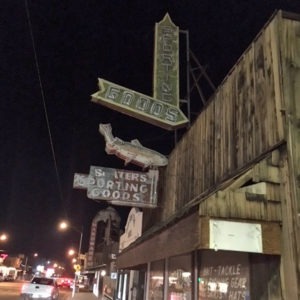 “Before photo” of the “jumping salmon” at the High Country Outfitters and Sporting Goods in Lone Pine next to Chamber of Commerce.

The return of vibrant neon lights along US 395, which is also Lone Pine’s main street and business corridor, “makes my heart smile when I see the signs. They bring back all my memories of childhood,” said Kathleen New, director of the Lone Pine Chamber of Commerce. New’s grandparents ran what is now Gardner’s True Value Hardware for 20 years when it was Hopkins Hardware, and her grandfather made the ice there. Both the True Value’s iconic flashing rainbow trout neon sign and the neon sign advertising ice were restored to their former glory as part of the project. 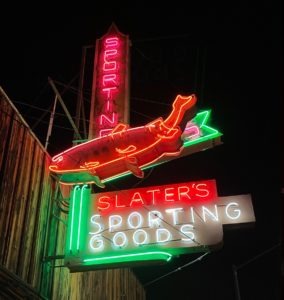 “After photo” of the “jumping salmon” at the High Country Outfitters and Sporting Goods lights up downtown area in Lone Pine.

New added that the entire downtown area has been literally “brightened up” thanks to glow from the numerous revamped neon signs. “You can really tell the difference,” she said. “This town looks really alive, now.”

The idea of restoring the town’s fading neon signs had long been discussed, and those discussions and the noticeable deterioration of the signs themselves caught the attention of artist Lauren Bon, of the Metabolic Studio, who has been directing the studio’s ongoing engagement in Lone Pine and the Owens Valley for more than a decade. Bon thought rejuvenating and upgrading the signs would be a unique blend of artistic restoration, community building and historic preservation. 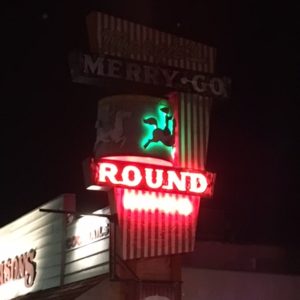 Merry-Go-Round is a favorite spot for freshly-made Chinese and American food in Lone Pine.

“Since 2009 Metabolic Studio IOU projects have been a small token of our appreciation for the water we use from the Owens Valley in Los Angeles. The IOU Neon project celebrates Main Street/Route 395 which has thousands of people pass through it annually,” Bon said.

The idea started to take more tangible shape in 2018 when Bon and the Metabolic Studio team began a conversation with business owners and residents about restoring the six remaining vintage galvanized steel and neon signs in Lone Pine and Independence that were originally installed in the 1940s and ‘50s.

The Metabolic Studio provided funding for the neon restoration project as part of its long-term, ongoing engagement with the Lone Pine community and Inyo County.

Metabolic Studio’s action included the skills of Kathleen New, Executive Director of the Lone Pine Chamber of Commerce, neon restoration expert John Iadipaolo, owner of Artistic Sign Company, and the proprietors of the businesses with original neon signage in need of repair,  which had not yet gone digital or LED. The project kept intact the vintage patina of the galvanized steel signs and put all the neon signs on timers to preserve the beauty of the dark sky in the area after hours.

Artistic Sign Company had to bring all neon and glass back to its shop in Ventura where craftspeople took field patterns on paper of the signs. Next, new neon tube glass that matched the color of the vintage neon was remanufactured from the original tube glass, filled with neon gas then returned to the towns of Lone Pine and Independence to be reinstalled. 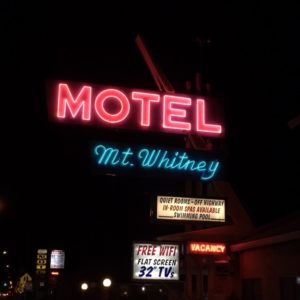 The Mt. Whitney Motel is located at the north end of town in Lone Pine.

In addition to the neon fish and other signs at Gardner’s True Value, the other rejuvenated neon signs are located at the Merry-Go-Round restaurant, the Mt. Whitney Motel, the “jumping salmon” at the High Country Outfitters and Sporting Goods; Ray’s Den Motel and the Courthouse Motel in Independence.

The local businesses and agencies that make this the project possible include:

The neon restoration project is the latest collaborative project between the Lone Pine community and Metabolic Studio. The studio’s ongoing engagement in the Owens Valley — AgH20 (Silver and Water) — began 13 years ago with gardening and performative projects in collaboration with the community that were dedicated to illuminating the relationship between the Owens Valley and Los Angeles.

These ongoing engagements began with The Tin Man/Owens Valley Glass and Water Orchestra performance at PPG (Pittsburgh Plate Glass, 2009) and continued with the IOU series (performative actions in Owens Valley as an IOU for water taken from there to Los Angeles) which include: the IOU Water Truck which released rainwater collected from the roof of Metabolic Studio in LA back into the Owens Lake as an act of compensation, the IOU Gardens and harvest gatherings which supported the growth of food, soil, and community in Lone Pine in partnership with local businesses and the LADWP, the Community Bread Oven, the Metabolic Soil Project (in partnership with Julie Fought of De La Cour Ranch and local mule packers) making soil and giving it away to growers who have reciprocally provided the availability of fresh food in the Owens Valley, the IOU Bank of Trust and Time (community time bank), and the IOU Theatre series of vintage radio plays relevant to the Owens Valley.

The Studio installed the “Salon de Fleurus” a contemporary reconstruction of Gertrude Stein’s Parisian salon, located at 123 Main Street in Lone Pine, which will be open by appointment for community gatherings.

Does anyone but me think this is a step in the wrong direction? Dark skies are beautiful, but neon signs aren’t.

I think all the headlights racing through our valley are more of an eyesore.

I think it’s only you.