According to a press release from NAS Fallon, a Navy MH-60 Knighthawk helicopter from Naval Air Station Fallon crashed near Mt. Hogue, Calif., late Friday afternoon around 5 pm while conducting search and rescue (SAR) operations for a missing hiker, but the crew couldn’t be safely rescued until Saturday afternoon. All four crewmembers survived the crash without injury and have been safely recovered. The cause of the crash is unknown.

The “missing hiker” was Ronald Bolen, a University of Oklahoma professor who went missing after hiking in Nevada and reaching Boundary Peak in the Inyo National Forest just before 3:00 p.m. Tuesday. He has been reported as being found safe after four days by the Nye County Sheriff’s Department on Saturday, July 17. 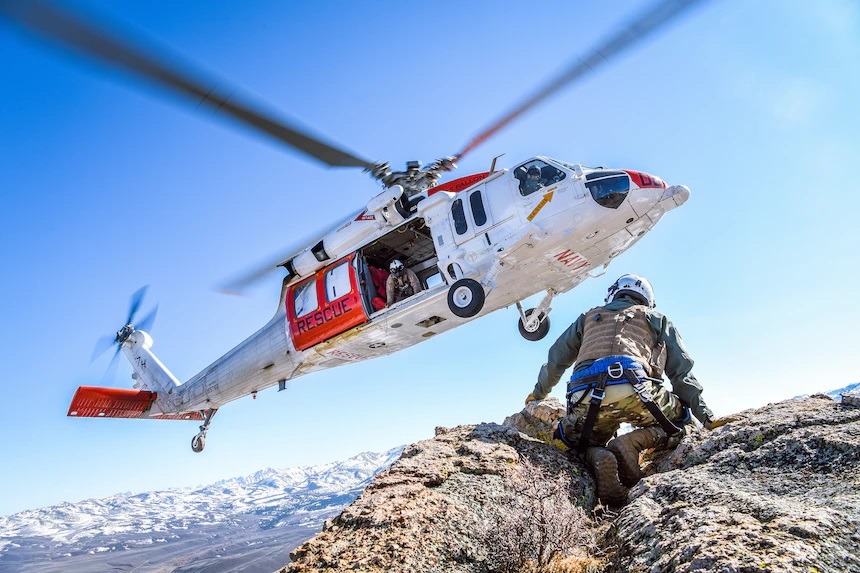 The crash site is at 11,700 feet above sea level in very rugged terrain. The crew was able to communicate to base and a rescue helicopter was sent from NAS Fallon but it was unable to effect a rescue, but were able to drop of an overnight kit to the survivors who spent the night on the mountain.

The crew were able to communicate following the impact, but spokesman Upham said a follow-on helicopter mission launched Friday evening  was unable to retrieve them. An overnight kit was dropped to the survivors who spent the night on the mountain.

Saturday morning an additional MH-60, Longhorn 01, said the station’s spokesperson, took  off from NAS Fallon, and it provided on-scene coordination although it could not affect a rescue. In the end it was a California Army National Guard CH-47 from the former Mather Air Force Base near Sacramento with superior high-altitude performance characteristics that delivered a ground SAR team to the crash site. The CH-47 returned to Mammoth Lakes for refueling and then returned to pick up the Longhorn crew around 2 pm.

The military is available to help in civilian rescue operations as long as it does not interfere with the primary mission.

It would be beneficial to know the circumstances involving the missing hiker, whether he had left a detailed route and timetable, did he have adequate communications (including battery), could he have done the hike with a second person, etc. Seeing his family’s Facebook posts it doesn’t seem so. There could… Read more »

Lovely bristlecone pine up there and some nice petroglyphs if you know where to look. But remote rugged terrain? I recall it as a class one hike off a good dirt road! Oh well… glad everyone is ok. Too bad about the helo. Hope no one is in trouble behind… Read more »

Sounds like an altitude density issue due to very hot weather. Rotor cannot grab enough air. A Huey went down in the White Mountains in the early 1990’s, elevation 7,800 feet. Same problem. Everyone walked away with no injuries. On a hot day at Mammoth Airport altitude density can be… Read more »

Excellent news that the crew survived. Lemoore NAS and Fallon NAS crews have saved a lot of lives over the years all around this region. Now the CHP is really making an impact doing the same thing, saving lives, trying to reduce the suffering of those in need, etc. .… Read more »