The pilot of an FA-18E Super Hornet died after the fighter jet crashed Wednesday in Death Valley National Park, the U.S. Navy reported Thursday.
The U.S. Navy confirmed the death of the pilot just before 12:40 p.m. Thursday saying, “The Navy has confirmed that the pilot of the FA-18E died in the crash. In accordance with DoD policy, the identity of the pilot will be withheld 24 hours. The Navy mourns the loss of one of our own and our thoughts go out to the family and friends affected by this tragedy.”
The pilot was missing following the fighter jet crash that left seven Death Valley visitors from France with minor injuries.
According to the official Twitter feed for the U.S. Naval Air Forces, the crash happened around 10 a.m. when the F/A-18E Super Hornet went down near an area often referred to as Star Wars Canyon — near the China Lake Naval Air Weapons Station.
The Navy reported the aircraft was on a routine training flight when the crash occurred. The pilot and jet were assigned to Naval Air Station Lemoore.
Star Wars Canyon, which was featured earlier this year in a story in the Los Angeles Times, is popular with visitors because fighter jets speed through it.
The Navy said in a statement Thursday that the pilot’s identity will be withheld until 24 hours after notification of next of kin in accordance with Defense Department policy.
The cause of the crash is under investigation. …
###
A U.S. Navy single seater F/A-18E fighter jet has crashed in Death Valley, California, according to the Navy. There are reports that visitors at the park have suffered minor injuries, a spokesperson for Death Valley National Park said. 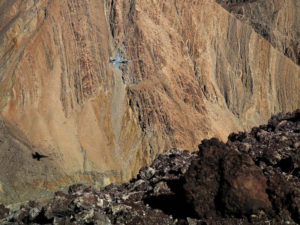 “At approximately 10 a.m. PST, a F/A-18E Super Hornet assigned to the ‘Vigilantes’ of Strike Fighter Squadron (VFA) 151 based at Naval Air Station Lemoore, California, crashed east of Naval Air Weapons Station China Lake, California,” said Joint Strike Fighter Wing public affairs officer. Lt. Cmdr. Lydia Bock. “Search and rescue personnel are on scene and the status of the pilot is currently unknown. The cause of the crash is currently under investigation.”

Flanders said the status of the pilot was unknown and that a search and rescue helicopter from China Lake, located in Ridgecrest, was en route to the crash area.

Patrick Taylor, a spokesperson for Death Valley National Park, said the park received a report around 10 a.m. PT from the Panamint Springs Resort that a military plane had crashed on the west side of Death Valley near Father Crowley Overlook in an area known as Star Wars Canyon.

The area has been used for military training flights since the 1930s, Taylor said, and regularly attracts tourists who want to get a glimpse of military pilots in action weaving through the narrow canyon in maneuvers reminiscent of the Star Wars movie. There are reports of visitors at the site with minor injuries due to the crash.

The Father Crowley Overlook has been temporarily closed. Emergency responders from the park, military, and Inyo County have been dispatched to the scene.