By News Staff on October 23, 2013 in Government Agencies/Utilities 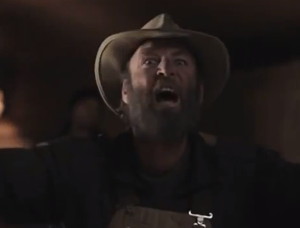 As the film critics said, first it was “Sharknado”, now “Avalanche Sharks”. What’s next? The SyFy Channel decided to make a TV film about mystical sharks released during an avalanche at a ski area. As sharks will, they love to eat humans. That makes it a bad hair day for Spring Break snowboarders.

Part of this kooky, science fiction piece was filmed in Mammoth Lakes. Some locals appeared as extras, and Jim Ouimet of Mammoth Dog Teams filled a memorable role. Like the soothsayer of the show, he warned in several scenes that “There’s nowhere to hide. They’ve tasted human flesh!” Ouimet said the dogs have a part too.

The trailer for “Avalanche Sharks” is out on You Tube. http://www.youtube.com/watch?v=sotQoOngYno.

We work to provide daily news to all of the Eastern Sierra, in the tradition of Eastern Sierra News Service and the Sierra Wave. We bring you daily happenings, local politics, crime, government dealings and fun stuff. Please contact us.
View all posts by News Staff →
Letter to the editor: “Inyo County Learned Helplessness Syndrome”
AltaOne donates to ICARE
6 Comments
Newest
Oldest Most Voted
Inline Feedbacks
View all comments

How about “They Live” but with alien man eating sharks that have taken over TOML looking like humans? One day you fInd a pair of sunglasses on the slopes and put them on and go to a Council meeting….5th floor….

Angelle….If your a fan of bad Sci-Fi movies,if you haven’t already seen it,get the one called “It !…..The terror from beyond space !! “……made back in the early 60’s,and used to scare the holy #^%& out of me,and giving me nightmares watching it as a kid….still available on E-bay for… Read more »

Wow, this kind of bums me out. I am a HUGE fan of bad sci fi movies and I am a really bad actress also I am a friend of Jim’s, kind of upset I wasn’t asked to play along. I will DEFINATELY be watching though, and Jimmy boy is… Read more »

Angelle, the casting call went out on the “Film Mammoth” Facebook page and email if one had already signed up with them to be notified of such. I was an extra in the bar scene shot in the Convict Lake Restaurant bar and I was wearing a flowered vest and… Read more »

Thanks Sierra Lady, I was unaware of the facebook page “Film Mammoth” I run the theater here in Bridgeport and I would just LOVE to be part of a the process sometime. Again thank you