Joining the State of Hawaii and 188 other U.S. municipalities, California passed a new law to increase the age of tobacco purchase to age 21, which takes effect, along with other new tobacco laws, this week, on June 9th. 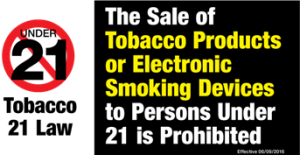 Senate Bill 7 X2, which increases the minimum smoking age with the exception of active duty military, is intended to decrease youth tobacco addiction. Ninety percent of current and former smokers began smoking before the age of 21. A 15- to 17-year-old is less likely to know a 21-year-old than an 18-year-old who will buy cigarettes for them.

The 2015 California Youth Tobacco Purchase Survey found that tobacco sales to minors at retail outlets occurred at a rate of 7.6 percent statewide. Since the minor’s ID is already in portrait and marked with a red stripe for alcohol purchases, the sales clerks will not need to do the math with the new law in effect to determine the age of the customer.

In addition, as of October 1, 2016, all electronic smoking device cartridges and solutions used for filling or refilling devices must be sold in child-resistant packaging that meets federal poison prevention standards.

Currently in California, the license to sell tobacco is a one-time fee. Assembly Bill 11 X2 increases tobacco licensing fees and requires annual renewal to cover the cost of administering and enforcing the licensing program. The new licensing requirements, which now also apply to any retailer that sells electronic smoking devices, will take effect January 1, 2017.

One bill not signed by Governor Brown is AB 10 X2, which would have allowed county boards of supervisors to impose local tobacco tax increases.

Retailers throughout California are preparing to comply with the new law this week. The California Department of Public Health (CDPH) finalized signage for stores reflecting the Tobacco 21 Law and launched a webpage with information on the new laws. The webpage is http://www.cdph.ca.gov/programs/tobacco/Pages/Tobacco21.aspx. Retailers can download and print signage from the website, and CDPH will be sending retailers packets of signs in the mail this month.

Information for retailers on the Tobacco 21 Law: http://www.cdph.ca.gov/programs/tobacco/Pages/Tobacco21.aspx

must be 21, New California tobacco law

How is making a person whol smokes a criminal, going to help them stop ?

Tinner
Reply to  and again

and again, read the first sentence of the third paragraph in this article one more time.
I agree with you that this is a waste of money, I’d rather we concentrated on enforcing the existing law that prohibits within smoking 20 feet of any business.

Must be stupid to smoke. =

I remember driving past Rusty’s in Bishop on New Years day (night) when it was 24 degrees and there they were….all the smokers huddling together outside the front door, like soldiers in a foxhole, freezing their butts off ! I damn near rear-ended the car in front of me, LMAO,… Read more »

Just wondering, what are current smokers supposed to do who have legally been smoking, but now aren’t old enough to smoke? Don’t get me wrong, I hate smoking. But if were going to outlaw it for some who have been legally smoking already, why not make it illegal for all… Read more »

Their they go again. Making laws that if enforced would put over half our nation in our great legal system.

Trouble…..The new law is to prohibit PURCHASE of tobacco products to 18-20 year olds…..do you really think Law Enforcement is going todrive around and check ID’s and arrest those that are underage and happen to be seen and “caught” smoking ?….maybe at the same time they’re going street-to-street,door-to-door and taking… Read more »

@Trouble,
Over half????
According to the CA Dept. of Public Health, 13 out of every 100 Californians smoke. The remaining 87 are apparently smart enough to know better. Nationwide the number is 17 out of 100. Not sure how you came up with your “over half” conclusion.

Charles, I don’t know where you grew up. But I would bet it’s a lot hire then half have tried smoking something before they are 21. Which half are you?
My point is, all these silly laws are useless .