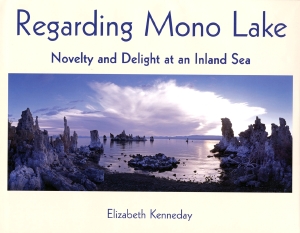 Although the famed tufa towers are, in most people’s minds, the lake’s trademark, a closer look reveals a landscape dotted with equally intriguing sights and views that draw attention to the region’s rich history and the people who played an integral role in shaping that history.

From Paiute basket makers to loggers and ranchers to environmentalists, the Mono Lake region has attracted an interesting cast of characters. And many of those characters left an indelible artistic mark on the region. Prehistoric Paiute rock art, drawings cut into trees by Basque sheepherders and even a rather creepy Clint Eastwood movie have all made a contribution to the cultural and artistic legacy of the lake.

Local author Elizabeth Kenneday’s new book, “Regarding Mono Lake: Novelty and Delight at an Inland Sea,” documents and explains that human and artistic history, while also showcasing the colorful, unique landscapes that have made Mono Lake an unforgettable natural attraction. Illustrating the book are 56 of Kenneday’s stunning panoramic photos, most of which highlight lesser-known features of the lake.

Kenneday’s photos are both informative and striking. The photos frame ancient tree stumps and abandoned ranches and buildings in a modern context. An abandoned Lime Kiln, a useless boat dock and marina, abandoned mine sites, and the famed Mono Mills lumber site, document the lasting footprint of man’s industrial efforts on the lake. The same is true of the photos of the decrepit “Spa Cottages” on Paoha Island, an empty water tank and a decayed wooden boat.

The lake’s artistic history ranges from Pauite petroglyphs to the eclectic “found art” of the Bottle Place to the making of Clint Eastwood’s “High Plains Drifter,” with is surreal Lago town site on the banks of the lake.

Of course, the famed tufa and picture-postcard sunsets and sunrises also are captured by Kenneday’s camera.

Kenneday will make a presentation and sign copies of her book, “Regarding Mono Lake: Novelty and Delight at an Inland Sea,” at the Eastern California Museum on Saturday Sept. 27 from 1 to 3 p.m. The museum is located at 155 N. Grant St. in Independence, call 760-878-0258 for more information.

Kenneday is well-suited to the task of explaining and exploring Mono Lake’s cultural story.

She was one of  idealistic activists who worked for the Mono Lake Committee while it battled the Los Angeles Department of Water and Power over the utility’s stream diversions that, by the 1980s, had resulted in an alarming drop in the level of the lake. That monumental environmental struggle succeeded in saving the lake. In 2004, she moved back to the Eastern Sierra and began “photographing Mono Lake again in earnest.” Kenneday currently splits her time between Reno and June Lake. She holds a Master of Fine Arts in Painting and Photography and a Ph.D. in Art Educational Theory. She is the emerita professor of Art at California University in Long Beach, and has been awarded a Traditional Fulbright Scholar Fellowship

“This eerie, yet exquisitely beautiful lake has inspired writers, movie producers, artists and photographers, and musicians … the lake and its basin have been the site of Native American activity, a gold rush, agricultural and ranching endeavors, an oil boom, other commercial activities, and tourism,” she writes. “I became ever more intrigued the ways the area had been perceived, interpreted, utilized, exploited and cherished by others who have encountered it. Mono Lake of the twenty first century bears the imprint of all these human activities – some visible, some less so.”