Mammoth Lakes, CA – August 21, 2018 – Mammoth Lakes Unified School District (MUSD), in partnership with the Mammoth Lakes Police Department (MLPD), has signed an agreement with TipNow™, the flag-ship campus safety product from Resiligence, Inc., based in Silicon Valley. TipNow™ is an anonymous reporting system that allows tips to be submitted through a variety of channels for officials to review and follow up as needed.

This new system is an important step in MUSD and MLPD’s “See Something? Hear Something? Say Something!” campaign focused on improving campus and community safety. TipNow™ is a tip collection and management system for anonymous tips originating from the mobile-app, text/sms and voice. TipNow™ facilitates automated notification to MUSD campus security personnel and MLPD personnel regarding non-emergency suspicious activity. Emergencies should always be reported by calling 911. 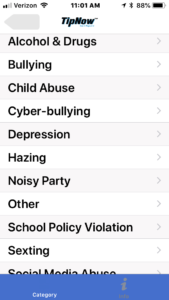 The new reporting system can help identify issues like:

The unique aspect of TipNow™ is its ability to keep the identity of the reporting user anonymous.  TipNow™ enables the school administration or the MLPD to anonymously interact with the reporter.

“We are pleased that MLPD and MUSD could partner with a program that will improve both school and community safety.  This new program is available now and easily accessible to download from the App Store.  We encourage our students and parents to become familiar with TipNow™ and to use it whenever they are aware of an issue,” stated Lois Klein, Mammoth Unified School District Superintendent.

“Thanks to the MUSD partnership, TipNow™ can be used by anyone in the Mammoth Lakes community to anonymously report suspicious activities at any time.” states Chief Al Davis, “These reports will be sent directly to MLPD for follow up. We strongly encourage our community to use this new system so we can work together to keep our community safe.”

Report suspicious activities by using the mobile TipNow™app available on iOS and Android or by using the school specific number:

This reply has nothing to do with the musd article but addresses a problem I’ve been having with customer service lately. I’ve been trying to add a name onto my checking acct at bank of america which I would think should be an easy thing to do. Now two weeks… Read more »

Great video by Sandy Hook Promise on this topic.