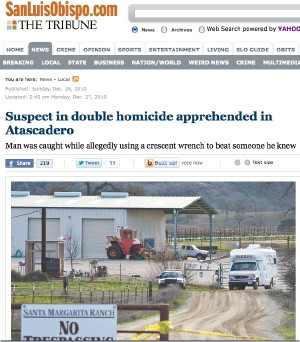 The southern Inyo community remains stunned and saddened by the horrible death of two local women visiting Santa Margarita for the holidays. The homicide victims have been identified as sisters, Bev Riley of Lone Pine and Kathy Jaeger of Independence. The suspect in their deaths, a 20-year-old Atascadero man, remains in custody in San Luis Obispo County.

Local reports said that the sisters were visiting Bev Riley’s daughter and son-in-law at Santa Margarita Ranch, east of San Luis Obispo, for Christmas. The San Luis Obispo Sheriff’s Department said that there was no clear motive for the shootings. Officers said that they received a call around 6:30 Christmas night. They said when they arrived on scene at Santa Margarita Ranch, a vineyard and cattle ranch, they found two people who had been shot to death in a mobile home.

Sheriff’s spokesman Rob Bryn is quoted in the San Luis Obispo Tribune as saying it is believed the suspect acted alone. The Tribune also reported that the scene of the murders was the home of the ranch’s cattle foreman, Jeff McKee, the husband of Bev Riley’s daughter, Allie.

The suspect allegedly stole vehicles and escaped to Atascadero where he reportedly went to a home, assaulted a man there and was overcome and held for deputies. They arrested 20-year-old Andrew Wesley Downs of Atascadero.

Officers have not yet released any more details of why and how these murders occurred. It is known that the suspect had a gun and shot Ms. Riley and Ms. Jaeger. Officers have not confirmed why Downs was in the residence.

Locally, friends and family informed Sierra Wave that a memorial fund for Allie McKee and family has been set up at the Santa Lucia Bank in Atascadero. Anyone wishing to donate may do so at this address:

We work to provide daily news to all of the Eastern Sierra, in the tradition of Eastern Sierra News Service and the Sierra Wave. We bring you daily happenings, local politics, crime, government dealings and fun stuff. Please contact us.
View all posts by News Staff →
Former Mammoth police officer’s termination appeal decision out
Mammoth Police Chief to meet with Town Manager over Hugelman Case