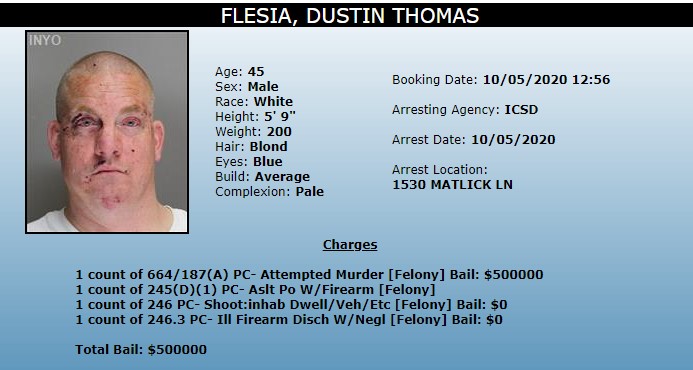 BISHOP, CA, October 5, 2020: At approximately midnight Inyo County Sheriff’s Dispatch received a 911 call regarding a domestic disturbance on Matlick Lane in the Bishop area with shots fired. Inyo County Sheriff’s Deputies, Bishop Police, and CHP responded. The female victim was able to run out of the house when the first shot was fired. Due to volatile situation and potential for the suspect to fire additional shots, the surrounding residents were evacuated.

The suspect was contacted by law enforcement; however, he refused to comply and barricaded himself inside the residence. The suspect fired multiple rounds at deputies. A crisis negotiation team was initiated to attempt to persuade the suspect to surrender. When that effort failed the Inyo/Mono Special Enforcement Detail (SED) team deployed CS gas into the residence. The suspect came outside but was non-compliant; he was hit several times by a beanbag gun, but again retreated inside at which point he armed himself with two additional rifles.

Further negotiations were attempted, and more gas was used. At approximately 6:40am the suspect came outside, and the Inyo County Sheriff’s Office canine was deployed. Dustin Flesia, a 45-year old Bishop resident, was taken into custody. Flesia was transported to Northern Inyo Hospital for treatment. No deputies were hurt or injured.

[SWM Note on Booking Charges: Flesia was booked for Attempted Murder, Assault on a Police Officer with a firearm, Firing a weapon in a Dwelling, and Negligently Discharging a Firearm. Bail was set at $500,000.]

I tried to comment but it did not post. Makes me livid the differences between the way they handle these cases. Sounds to me like they handled this case the way they should. But it is also nothing like the way they do things on the Rez. From the use… Read more »

Why is there no comments? If this man was not white there sure would be!!!!