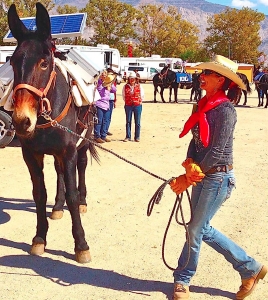 On Friday, October 18th, 100 mules and people from Eastern Sierra pack stations will gather at the intake of the Los Angeles Aqueduct to begin a 240-mile march to Los Angeles. The event marks the 100th anniversary of the Los Angeles Department of Water and Power aqueduct. This anniversary is met with some cynicism in the Eastern Sierra where DWP has played a heavy hand on water and land matters. The director of the mule event wants to raise awareness of LA’s water sourceMc.

Lauren Bon of Metabolic Studio in Lone Pine  favors a reconciliation of LA and the Eastern Sierra. Bon says that she works through “performative action and follow through after the action with years of community engagement.” She sites the current making and distribution of soil with Julie Fought in the Lone Pine area. Bon said the mule walk “stems from that engagement” and uses manure from pack stations to make soil.

The Mule March will also help local packers. Jennifer and Lee Roeser of McGee Pack Station were hired by Lauren Bon and Metabolic Studio to perform the 100 Mule March. Ms. Roeser said all of her mules and some from other local pack stations will join in this event along with staff, equipment, purchases and many services from Inyo County. She told the Inyo Supervisors that the event amounts to a real economic gain for the Owens Valley.

The mules and people will kick off the event around 10:30am and start the journey at noon. For most of the walk, they will follow alongside the aqueduct. They will then march down to the LA Cascades where Eastern Sierra water flows into the City. That’s November 5th when LADWP will also hold a ceremony at the cascades.

The mules and people will continue through the San Fernando Valley and finally to Glendale where Lauren Bon says, “We have organized a Veterans Day Parade to highlight the 2,000 year tradition of mules in the military.” She said it also builds on her work at the Veterans Administration in West LA in providing homes for veterans. The mule teams will lay over at the LA Equestrian Center and finally back home to the Owens Valley on November 13th.

Roeser said she is honored that the Studio and Lauren Bon entrusted this event to her and her husband. Said Roeser, “As a packer you prepare your whole life for something like this. You can put together your skills and assets for a unique event to celebrate a modern, engineering marvel, aside from political feelings in the Valley.” Roeser also said mules are getting overdue notice.

Lauren Bon, who is also an Annenberg Foundation Trustee, said the mules are a “subject of the walk.” She said the mules are “taking the cottonwoods, in sapling from the Sierra to plant at the new ‘Delta of Mount Whitney; and our intention is to reintroduce the mule as a work force in the construction of our most ambitious work to make another watershed possible.” She refers to a project involving the Los Angeles River.

Sad part is that Owens River water, after being used and polluted, enters LA river through storm drains or the ocean through sewage treatment plants. LA river is mostly used as storm drain and fresh water from rainfall washes trash and pollution from streets into ocean and does little to… Read more »

I knew it was coming, check the Facebook photo, that mule has a solar panel mounted behind it’s ears.