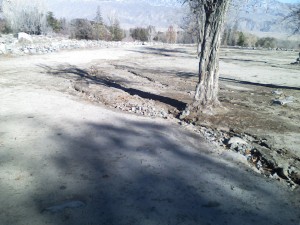 Minor flooding eroded this area of the hatchery parking lot.

Worried about silt and debris washed down into the hatchery parking lot, Senior Manager of Hatcheries Gary Williams said that Fish and Game had to shut down the hatchery. Williams did drive up to the hatchery from his office in Victorville and met with local officials.

Bruce Ivey of Friends of Mt. Whitney Fish Hatchery said that he met with Williams, Jim Riley, Geologist Jim Stroh and Inyo Public Works Director Ted Pederson to come up with a better way to handle minor emergencies at the hatchery without closure.

They found a way. Williams confirmed that he and others would use a new protocol. Barring complete disasters, someone from Fish and Game will touch bases with Dr. Stroh and Mr. Pederson.

Fish and Game’s sensitivity about the hatchery stems from the earlier major flood and mudslide that tore through the hatchery, the Oak Creek community and the highway.

Public Works Director Pederson said that his department would monitor the culvert above the hatchery and keep it open after storms. Pederson said he would also talk to upstream landowners with the possibility of creation of silt ponds. The earlier mudslide and flood ripped away acres of vegetation, making silt and debris vulnerable to slides.

We work to provide daily news to all of the Eastern Sierra, in the tradition of Eastern Sierra News Service and the Sierra Wave. We bring you daily happenings, local politics, crime, government dealings and fun stuff. Please contact us.
View all posts by News Staff →
DUI Arrest After Search Through Snow
Bishop Family Hopes to Find “Shiloh”