Since 1930, the family of Daris Moxley of Bishop has worked the pastures and raised cows on their DWP lease. This season, Moxley said they did not receive much of their irrigation water and had to dry up what amounts to two-thirds of the ranch. She says she just wants some real answers. Other nearby lessees have not received their normal water allotment either. 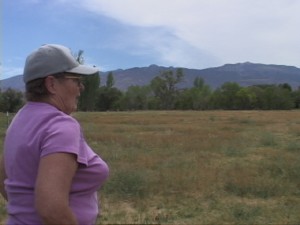 DWP manager Gene Coufal said generally that water use has increased in the West Bishop area and he's working with the water master there. "The problem," said Coufal, "is to get the allotment to the LA lessees. Coufal indicated that in the past some down stream lessees have been shorted their water, and now DWP has to "balance the water for all lessees." Coufal said that the below normal run-off has added to the issue.

Coufal did say that according to the water agreement, DWP has to maintain irrigated lands as they were in the 80s. He confirmed what Mrs. Moxley said, they have conducted a few meetings with lessees over this water issue.

For the Moxley's time has moved on and the growing season with it. Out of their 99 acre lease, they have been able to irrigate only 36. They've sold more than half of their Red Angus cows.

A trip through the Moxley pastures revealed two major sections dried up. The ditch at the back of the property carries some water but used to deliver a lot more.

Photos that Moxley took of the past compared to today show the difference in the condition of the pasture. Moxley said she just wants some answers on how much water shes getting and why shes not getting enough.

Moxley and others have said that now DWP and some Inyo Supervisors say that the only answer is to drill a well to provide more water. Moxley is skeptical, and Stan Matlick, whose family won a decree against pumping for export in Bishop made it clear to Inyo and LA officials at the recent standing committee meeting that he still has the money and the will to fight new wells on the Bishop Cone.