In a press release from the Inyo County Sheriff’s Office on June 16, it was reported that on Sunday evening, June 13, Inyo County Sheriff’s Dispatch was contacted by a stranded hiker on Mount Tom. According to the hiker, he and his partner split up since they hiked at different speeds and to lighten his load, he dropped his daypack at the base of the last steep section (1600’ below the summit). From there he proceeded with a water bottle and one warm layer. This decision violated the two first rules of hiking: Stay together and never leave your backpack behind. 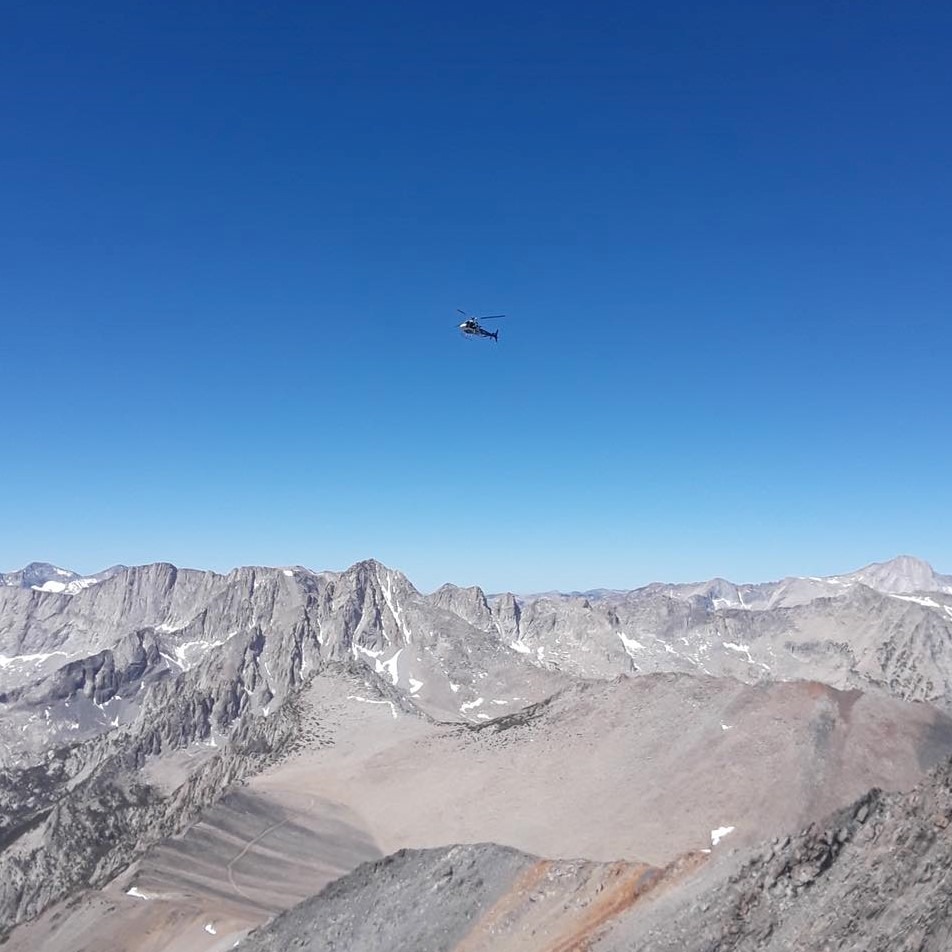 At some point, the stranded hiker made the decision he would turn around rather than get too tired or hurt himself. However, he took a turn down the wrong side of the SW-ridge and from there, descended off-route down a steep gully. After a long while, he realized his mistake and turned around.

With water long gone and no food, he became too exhausted and got cramps due to dehydration. His partner, who had already summited and was on the descent just above Horton Lakes, received a message from him via satellite messenger and tried to hike back up to help him. But after nightfall, he decided it was too dangerous to proceed and therefore never reached him.

A helicopter from CHP Inland Division Air Ops arrived in Bishop Sunday night and picked up an Inyo County Search and Rescue (SAR) member and attempted to rescue the stranded hiker. No suitable landing zone could be located, so the mission was put off until sunrise.

On Monday morning, CHP returned, picked up another member of Inyo SAR, and flew to Mount Tom. Despite the altitude of 12,700’ and increasing gusty winds, they managed to lower the SAR member to the hiker.

The SAR member placed the hiker into a “hot seat” – a special seat for hoisting persons – and he was extracted from the mountain. CHP then returned to Mount Tom to pick up the SAR member.

Hiking tips: Always stay together as a group and never separate yourself from your backpack. Frequently check your map to make sure you are still on the right route; mountaineering routes are unmarked and often don’t have a visible ‘trail’.

Remember STOP for safe hiking: Stay together; Turn around on time; have full Ownership of your decisions; and be Prepared.

Inyo SAR would like to express deep gratitude to CHP Inland Air Ops for their valuable support!

At least these guys were smart enough to carry satellite beacons so they could communicate in a emergency, which really helped the SAR Team in effecting the rescue in a timely manner.