By News Staff on May 18, 2015 in General Misc. Stories, Government Agencies/Utilities, Public Event

The Memorandum of Understanding partners met last Thursday in an effort to re-allocate what little water there is to keep area ranchers’ in business. 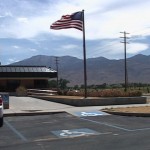 According to Inyo County Water Department Director Bob Harrington, the meeting resulted in a potential 4,000-5,000 acre-feet of water that could be added to the 16,500 acre-feet scheduled for irrigation this summer.

Facing a 66-percent cut in irrigation water and seasonal run-off at 4 percent of normal, water for agricultural use will have to come from cuts to other mandated Los Angeles Department of Water and Power obligations. The partners, Inyo County, LADWP, the Owens Valley Committee, the Sierra Club, California Department of Fish and Wildlife and the State Lands Commission, all have to agree on those cuts.

The additional irrigation water could come from Warren Lake, lower flows to the Owens Lake Delta and lower base flows in the Lower Owens River Project. “I think there was general agreement that these reductions would be feasible with appropriate monitoring,” stated Harrington via e-mail.

The next step: the partners go back to their governing boards for approval then come back together next week “to see which options all groups will agree to,” said LADWP spokesperson Amanda Parsons. “Things are looking positive and, hopefully with the continued emphasis that there isn’t any other water available, we can move forward and get some more allocations for our ranchers,” Parsons added.

Options discussed at the May 7 Standing Committee meeting, water from storage offset by potential savings on Owens Lake dust mitigation later this year, are outside the purview of the MOU partners. The Standing Committee will reconvene in Independence June 4.

If I could offer the idea that cuts have been considered and made in Los Angeles and if that would be an accurate statement there is still the issue of the lack of sufficent waters in the Owens Valley mostly due to this 4th year drought. I know that there… Read more »

“Facing a 66-percent cut in irrigation water and seasonal run-off at 4 percent of normal, water for agricultural use will have to come from cuts to other mandated Los Angeles Department of Water and Power obligations.” “The additional irrigation water could come from Warren Lake, lower flows to the Owens… Read more »