By News Staff on March 11, 2013 in Government Agencies/Utilities 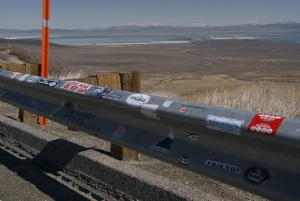 This familiar guard rail at the Mono Lake viewpoint restrained a pick-up from plunging far over the cliff.

Fresh snow and icy roads apparently contributed to an accident that sent a pick-up over the edge of Highway 395 at the Mono Lake Viewpoint on Conway Summit.

California Highway Patrol Officer Ann Morin said that the driver and passenger of the pick-up were from Victorville. They received minor injuries. The officer said that this was a one vehicle accident in which the pick-up was southbound around 8:15pm Friday when it was snowing.

Officer Morin said the guardrail did what it was supposed to – kept the truck from plunging down a long cliff. The truck did damage the guardrail from the impact.

Officer Morin said she wanted to remind people that when it’s snowing, motorists need to slow down and especially in curves like the one before the viewpoint. She also said both people in this accident were wearing seat belts which went a long way to protecting them.

They were checked out at Mammoth Hospital following the accident.

Glad to hear there were only minor injuries.

Were any of the stickers on the guardrail damaged or need to be replaced?
Will there be prime real estate available for new stickers?