By News Staff on September 25, 2012 in Government Agencies/Utilities 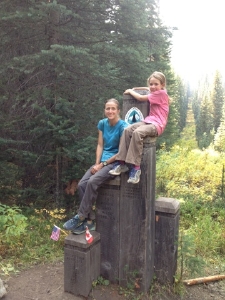 Heather and Sierra Burror at the end of the trail. Photo from their blog.

In April Heather Burror, a Big Pine second grade teacher, and her 8-year-old daughter, Sierra, started their hike of the Pacific Crest Trail at the California/ Mexico border. Monday they ended their 2600-mile trek in British Columbia, Canada. Heather sent out a text to say they had reached their goal.

On their blog, sierrapct.blogspot.com, Heather posted this: “With mixed feelings — both excited and sad that this incredible journey is coming to an end — we began our descent to the border.” The first person they saw was Jeff Burror – husband and father. Together the family continued to the border and Monument 78, the Pacific Crest Trail monument that marks the border between the United States and Canada. From there, the three continued the trail to Manning Park, British Columbia, Canada.

As Heather wrote on the blog, ” We were excited that we had accomplished what we set out to do: we hiked the entire official PCT with no flips, no skips, no shortcuts or alternate routes, leaving a continuous, unbroken line of footprints from Mexico to Canada. But we were also sad that the adventure is coming to an end.”

Heather wrote that many hikers talk about the difficulty to transition from the trail. They did finish their trek earlier than planned, leaving time to explore alternate routes not taken and “get caught up on schoolwork.”

Big Pine School District had granted Heather a leave of absence for the trip. Sierra, a Bishop School student, studied along the route. Heather had earlier written that they called it the Pacific Crest Trail Academy. Sierra kept a journal on her experiences as well as a math journal and used her Kindle to keep up her studies. As for science, Heather said they learned a lot about “the plants, animals and history of the places we pass through. We also are learning about the moon and the constellations, which we can see clearly at night.”

The mother and daughter hiked between 10 and 24 miles every day.

Congratulations! What an impressive feat! My 8 year old daughter is a student in Mr. Burror’s 4th grade class. She mentioned to me that her teacher’s wife and daughter were hiking the PCT, I had no idea that Sierra was only 8! That is so cool, what an awesome experience… Read more »

This story is such an inspiration! Especially with so much crime and craziness in this world. Thank you for covering this story, and I hope that these two gals will motivate others to follow their dreams. I do believe that Sierra set a world’s record as being the youngest to… Read more »

Congratulations to you both! I’ve followed and admired the trek you were on. Hat’s off to you both, it’s pretty unbelievable!!!