The heat of Death Valley may have claimed its first victim of the year. 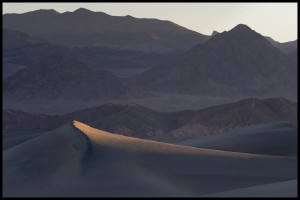 On Wednesday, searchers spotted the body of 69 year old Jay Haverstick of Dayton, Ohio.
Park spokesman Terry Baldino reports that at about 6:30 am Tuesday morning, Haverstick had left for a short hike into the sand dunes near Stovepipe Wells. His friend had said that Haverstick expected to be back no later then 10:00 am. Haverstick did not return as scheduled and the friend notified the rangers at Stovepipe Wells who started a search at close to 1:30 pm Tuesday.

Searchers looked for the man until nightfall, then continued Wednesday morning at 6:00 am. The mans body was spotted by a CHP helicopter at about 9:45 am on Wednesday. Baldino reports that Haverstick was found about a mile and half from where he had parked his car, but only a half mile from the ranger station at Stovepipe Wells.

Haverstick may have lost sight of his car while in the dunes and realized he was closer to Stovepipe Wells and headed in that direction, Baldino reports. It appears that the heat or a combination of heat and existing health issues led to the mans death.

The 69 year old had a history of medical issues, Baldino says, but temperatures reached 112 degrees by afternoon.

While it is not yet determined what exactly caused this fatality, heat related deaths on relatively short walks do happen.

With the 120 degree temperatures of July and August people usually stay close to their cars, but Baldino says that late spring seems to be especially dangerous. The first few hours of the morning can be cool, with temperatures in the 70s and 80s. People often leave on short hikes with only a small amount of water, then dont realize how far they have gone. When the temperature starts to rise, the hiker then has to turn around to walk back in the heat.

Baldino described a past fatality near Stovepipe wells. In similar conditions a young couple went for an early walk in the dunes. The two had split up when the male wanted to keep hiking. The female was waiting at the Stovepipe Wells Ranger Station. When the boyfriend did not return, rangers went looking and found him dead about a half mile from the Ranger Station. He had only been out a few hours, Baldino says.

Baldino says that the number one killer in the park is the highway, but heat-related deaths are also common. Some years, no one dies from the heat, he says, though in other years, two to three people succumb. Its sad starting out the year with a fatality, he says, adding that its not yet even summer.

When the heat reaches triple digits, park officials urge visitors to take the age old strategy of heading to the cooler temperatures in higher elevations of the park, like Wildrose and Telescope Peak.

We work to provide daily news to all of the Eastern Sierra, in the tradition of Eastern Sierra News Service and the Sierra Wave. We bring you daily happenings, local politics, crime, government dealings and fun stuff. Please contact us.
View all posts by News Staff →
Head On Accident On 395- No Fatalities
Bureaucrat Beat: Slap in the Face, Trapped in the Newsroom, Memory Lane