Just a week since the passage of legislation designating the Alabama Hills a National Scenic Area, the Bureau of Land Management and Stewardship Group held the first workshop, step one in the journey to a plan determining how the area will be managed into the future. 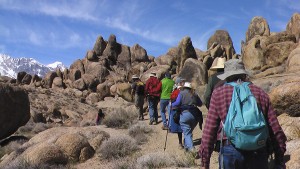 The format included background on the effort to get the designation, a description of the area boundaries and current usage followed by community input on trails, campgrounds, special permits and vision.

At the conclusion of the two hour session, it seemed the first question that needed answering was do locals want more visitors or fewer.

According to BLM Range Technician Dave Kirk approximately half of the user groups are motorists and hikers, with climbers and campers, both tent and RV, each accounting for another 40-percent. “The vehicle count in 2018 was 60,000,” Kirk said. “That’s double the numbers 10 years ago.”

While campgrounds aren’t maxed out, dispersed camping is spreading to previously undisturbed areas. Kirk told the group, most are in good shape but Mike Prather explained that’s probably because locals look after the sites and clean up the messes.

That was typical of other aspects of Alabama Hills’ activity. Things are pretty good, but with the increase in visitors comes an increase in misuse.

Community input trended to regulating bad behavior by restricting the activity, whether it be OHVs going off-trail, dispersed campers obliterating vegetation or careless target shooters. One of the more feisty community members wanted to shoot drones out of the sky.

BLM Resource Management Specialist Sherri Lisius suggested education as the first step. Better-located and additional informational kiosks were suggested as was the use of social media.

“There hasn’t been much promotion by the Stewardship Group,” said Kevin Mazzu. “The increase in use has been driven by social media. We have to communicate this is a special place and we have to take of it.”

Jolie Varela with the Lone Pine Paiute-Shoshone Tribe is already doing that. In response to social media posts of idiots posed on top of the Arch, Varela responded with a description of the value, uniqueness and fragility of the rock formation. The photos were removed and the posers apologized.

Hypothetically, there will be federal funding to be used on the Alabama Hills, for education, enforcement, infrastructure and whatever other elements in the final management plan. Mazzu explained the Congressional Budget Office has authorized $4,000,000 for the Alabama Hills, but he was not sure if the funds had been appropriated.