By News Staff on April 3, 2014 in Government Agencies/Utilities 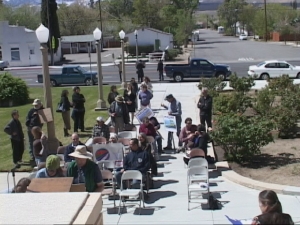 Citizens rallied at a press conference before the Board meeting.

With County plans for solar development sites much reduced, uncertainties still remain until the Planning Department Staff comes back to the Board of Supervisors with a final revision of the Renewable Energy General Plan Amendment. During the Tuesday discussions about solar development, some legal and environmental issues came up.

Don Mooney, attorney for the Owens Valley Committee, sent a letter to the Inyo Supervisors about the Renewable Energy General Plan Amendment. He said the OVC has concerns about the proposal to locate large-scale industrial solar within the Los Angeles Department of Water and Power mitigation project areas identified in the Lower Owens River Project and other land use documents.

Representing the Sierra Club, Mark Bagley said this group also has concerns about impacts on mitigation areas in the Long Term Water Agreement, such as Laws and the Lower Owens Project.

Many speakers at the Board meeting wanted small solar and roof top projects, but admitted that those projects are not included in the State mandates for renewable energy. Several urged the Board members to lobby the State to include rooftop and small solar in the utility company mandates.

Although the County’s Plan for solar sites is still not definite, the proposal supported by most Board members includes half the solar sites of the original plan. The sites are in Laws, the Owens Lake, Rose Valley, Pearsonville, Trona, Charleston View, and Sandy Valley.

Do the many environmentalists who spoke at the meeting believe they are failing to address climate change by fighting the large-scale solar? One man, Alan Pietrasanta said, “I reject the notion that you have to sacrifice our tourist economy to slow down climate change.”

Many also agreed that the County needs to closely watch any expansion of power transmission lines which could bring on even more solar development.

Pearsonville is an ideal place for a big PV array. Considering how alfalfa farming in the Indian Wells Valley is sucking the aquifer dry (why do people grow such a water intensive crop in the desert?) I would very much love to see the alfalfa fields there converted to PV… Read more »

There is little, if anything, about the Owens Valley that is pristine. Look at some satellite images. Roads, industrial sites, junk, stuff — everywhere.

Ken the troll is out again.

Your comments show how little you know about the OV. Stay in Mammoth. Thanks!

Sorry “Joe” I understand why you are angry. I used a big word that you don’t understand. Here’s what pristine means. Get on your OHV and go see if you can find some: pris·tine adjective \ˈpris-ˌtēn, pri-ˈstēn, especially British ˈpris-ˌtīn\ : in perfect condition : completely clean, fresh, neat, etc.… Read more »

Ken, things don’t have to be pristine to be beautiful. Maybe if you got away from Google Earth you might see it.

The Alfalfa is for the cows and ranch animals. The Owens is hardly a dry desert. Bishop used to have ground water just a few feet down. DWP/L.A. is wha’s taken the “pristine” and water out of here.

Pearsonville is isn’t in the Owens Valley. It is in the Indian Wells Valley in the upper Mojave Desert, right next to China Lake and the aquifer under that valley, it’s sole source of water, is being overdrawn by about three time annual recharge. A third of the water used… Read more »

This installation is about 2% of the Manzanar Solar Ranch. I’m still trying to find out how big an “Industrial Scale” solar PV installation is. In my opinion, the best point of use solar is solar thermal to heat water. Heating water is the biggest use of energy in a… Read more »

No Ken, PV does not heat water. That is solar thermal and none of the proposals going forward now use that technology. PV, for “photo-voltaic” panels convert solar energy to electricity directly at the atomic level. The materials in a PV panel absorb photons of light which causes them to… Read more »

“point of use solar is solar thermal to heat water. Heating “