The Los Angeles Department of Water and Power’s Southern Owens Valley Solar Ranch is lying in an induced-coma for the next decade, or so. 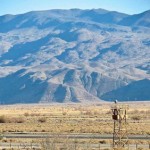 While the 200-megawatt solar project east of Manzanar was removed from the Priority Queue List March 15, the department “reserves the right to renew exploration into the SOVSR at a later date. LADWP will continue to examine the viability of this renewable project for a commercial operation date estimated to be between 2024-2027,” according to spokesperson Amanda Parsons.

LADWP appears to be keeping its options open in the face of state requirements to achieve 50-percent renewables by 2030.

Parsons confirmed that once a project is withdrawn from the list it “will go to the end of the queue” if the developer resubmits it.

One factor that could have indicated a death knell of the solar ranch was the capacity of the Inyo-Rinaldi Transmission Line; or more specifically, if the capacity is reached prior to a resubmitted SOVSR request.

However, there are also options available to increase that capacity. According to Parsons, “the interconnection studies evaluate only the ability of the transmission system to accept the interconnection…not evaluate transmission capacity on any particular line. If a transmission service request is received and the line capacity for that path has already been reached, then we are obligated to perform a study to determine what facilities need to be built or expanded to add the requested capacity to that path.”

Although the department doesn’t want to admit it, the citizens of Inyo killed this project (and likely Northland’s) by organizing among themselves and with their neighbors to the south and conveying a compelling message of opposition. Congratulations to everyone who participated.

Currently there are 10 projects totaling 1654 Mega Watts on the Priority Queue List. In the recent past on October 8, 2014 there were 16 Projects listed with a total of 3358 Mega Watts. Seemingly a major reassessment was made with the SOVSRP and Northland Power being part of it.… Read more »