By News Staff on May 5, 2014 in Government Agencies/Utilities 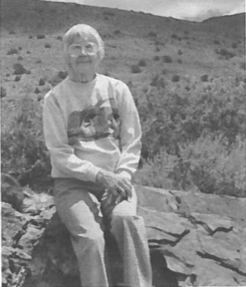 The Bishop Police Department announced last week that they would re-examine the case of a missing person from Bishop. Jennie Wyckoff, 90, had walked away from High Sierra Manor rest home in 1996 and was never found. We asked Police Chief Chris Carter if the request for further investigation by Ms. Wyckoff’s family might be related to the recent discovery of what is believed to be human remains in Mono County.

Chief Carter said the family approached him several weeks before discovery of those remains. He said Wyckoff’s relatives said that the unexplained disappearance of Ms. Wyckoff has been “something that has plagued the family for many years.” Chief Carter said Ms. Wyckoff has one living son. Her daughter died a few years ago and the grandchildren were recently going through some of the daughter’s things and found files related to the case.

Chief Carter said the family is aware that other cold cases from around the country have been solved through new science and “they simply asked if we could maybe take a look at that possibility.” The Chief said his Department is in the process of working with the National Missing and Unidentified Persons System to try to obtain a DNA sample from the surviving son in Idaho. Chief Carter explained the DNA would be entered into the database “on the outside chance that we might get a match to any found remains that have been entered into the system.”

The Chief had said that liability issues nvolving High Sierra Manor had possibly caused some to be unwilling to talk when Wyckoff disappeared. It is hoped anyone with information will now come forward. Police are also working with those who investigated the disappearance back in 1996. The Police press release on this case said that Jennie was always considered a missing person but that the possibility exists that “there were other circumstances surrounding her disappearance.”