By News Staff on May 17, 2012 in Government Agencies/Utilities 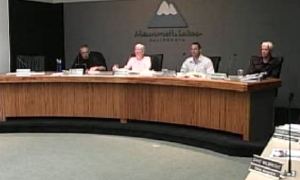 Once again, a lot of repetition  at the Mammoth Town Council meeting Wednesday night.  Strangely, Assistant Town Manager Marianna Marysheva-Martinez once more stood up and talked about the same budget points.  She repeated many of the same things she has said at previous meetings, pointed the public to a budget document on the Town website and talked about the same plans to cut nearly $3 million out of next fiscal year’s budget.  The Mammoth public was largely absent.

Martinez did, for the first time, say that the consultants’ fiscal forecast shows that after the budget reduction plan is in place, in the first 5 years, $3.6 million in net funds will be generated.  Then she said after 5 years, $550,000 annual surplus would be available to satisfy MLLA and other creditors.  That was the only new information.

Martinez repeated the same discussion that employee pay concessions would theoretically save $1 million, departmental reductions – another million.  The budget plan would cut 10% from Tourism, Housing and Transit, raise $500,000 more in TOT enforcement, cut road rehab by $750,000 and other cuts.

The Assistant Town Manager did say that once the Town confirms the Budget Reduction Plan it will “likely be in place a long time,” she 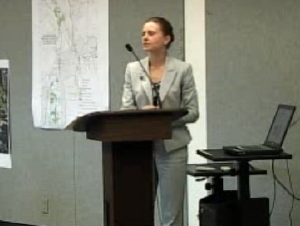 Nothing new about MLLA was revealed.  Town officials remain in mediation with other creditors.  The Budget Facts document on the Town website also says that “In the event that mediation is unsuccessful, the Town may then seek Chapter 9 bankruptcy protection.”

Rick Phelps of High Sierra Energy Foundation objected to the plans for a $12,000 cut in his organization’s funds from the Town.  Phelps reasoned that the tangible benefits of the Foundation warrant continued funding.  Council members said nothing. 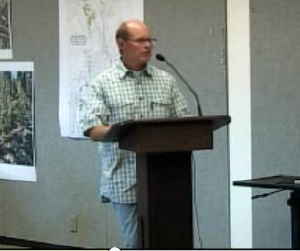 Police Officer Luke Schwartzkopf said the MLLA judgment has "ripped the fabric from our Town."

They also said nothing to Mammoth Police Officer Luke Schwartzkopf who stood up during public comment to say how sad he is about the mess the Town finds itself in.  He said, “The fabric of our Town has been ripped out from this judgment and budget problems.”  He also said, “Some of you folks have let us down.”  He named “big time” mismanagement and the need to hold some accountable.  Schwartzkopf said he feels he’s been put in an adversarial position, referring to the mediations over employee concessions.  He asked the Council to go easy on the police.

The next Council meeting is scheduled for June 6.  The next mediation session is set for May 29th.

There is simply no money in selling fishing lures, snowboarders are kids who eat at McDonald’s, and with another bad snow year Mammoth Lakes will be history until marketing visionaries materialize and offer things of real value and culture to those who still have money. Small towns like Carmel-by-the-Sea and… Read more »

Yes, it does pay to advertise. But don’t waste ad monies on 20-something snowboarders, trout fishermen, or motocross kids. In tough times, you must target those who have the money. Today’s affluent traveler is looking for beautiful scenery, good dining, and some quality cultural experiences. Mammoth Lakes has all of… Read more »

Bullsh*t. Affluent travelers will go to Asia or Australia or New Zealand or any one of hundreds of much more beautiful and interesting places. Do you know that people are actually standing in line to climb Mt. Everest? They have cruse ships that go to Antartica. You can be anywhere… Read more »

The entire state of Michigan was in such dire straits, nobody knew what to do. Today we see “Pure Michigan” tv ads all over the place. Michigan’s tourism is skyrocketing.
It pays to advertise.

Could you please post the historical statistics of Michigan’s economy since WWII and show us how tourism has generated an economy that is more stable and productive than the hard industries that left for China in the last 30 years? That’s a challenge. Your implied message is that tourism is… Read more »

I know, but it still sounded so inept and still no innovative suggestions for RESTRUCTURING or increasing revnues. Very disappointed.

Ruth, as long as we are 100% reliant on tourism as our primary industry, we really don’t have many options for increasing revenues. We don’t produce anything. All we do is tell people how pretty we are and that they should come up and take a look — and oh… Read more »

Did anyone hear MMM say that she was surprised to find that there were actually 97 employees for TOML instead of the 80 she thought? What is going on? CLEAN HOUSE and START FRESH. Make everyone re-apply and re-qualify for their jobs like they did in Park City prior to… Read more »

I think she then added that the members of the Town Council and Commissions were in that higher number (97).
BK

The council and our town staff are ONE BIG joke! And they are all protecting their nice big pay checks while the rest of us rott.

Get rid of MLT and all our over paid clowns.

… and all Rusty Gregory has to do is lay off people, enjoy his new mansion, and continue laughing all the way to the bank.

“Strangely, Assistant Town Manager Marianna Marysheva-Martinez once more stood up and talked about the same budget points.” Worth every penny of the $4K per week being paid to 3M and I’m sure Wilbrecht will concur with everything she said!?!?! What an embarrassing example of leadership on the part of the… Read more »

“the consultants’ fiscal forecast shows that after the budget reduction plan is in place, in the first 5 years, $3.6 million in net funds will be generated.” Oh really? Well, it looks like we’ve found a solution to our financial problems. Just hire a consultant to make a rosy forecast… Read more »

Sounds a lot like Romney’s economic “plan” doesn’t it Ken? Cut taxes on the rich/big business, and the offsetting revenue and more will just magically appear…